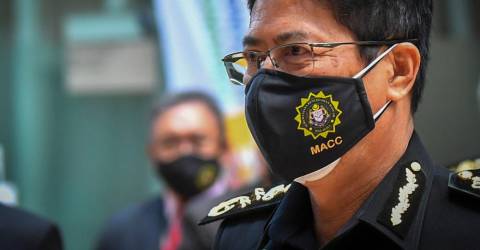 Azam said the investigation papers would be submitted to the deputy public prosecutor in the near future to determine the next course of action.

He said investigations on other companies were ongoing and the MACC was working together with the National Unity Ministry to set up a special task force to look into other claims.

“The MACC has seized all reports submitted by the companies from 2018 to 2020,” he told reporters after launching the anti-corruption awareness campaign in public transport – a joint initiative between MACC and MRT Corp – at the Muzium Negara MRT station here, today.

He said the MACC was still investigating two aspects, namely the elements of crime and improvement of the procedures and grant allocation system.

Azam admitted that there were flaws in the system and procedures adopted by the government, adding that MACC was discussing the matter with the respective ministry to prevent recurrence.

Prior to this, it was reported that MACC was reviewing all applications, expenditure reports and programmes said to have been implemented by recipients of the Mitra allocations from 2019 to 2021.

This was in view of the arrest of several company directors on suspicion of being involved in the misappropriation of Mitra funds.

A total of 337 companies, associations and non-governmental organisations (NGOs) were identified to have been approved grant allocations by Mitra from 2019 to 2021, with an allocation of about RM203 million.