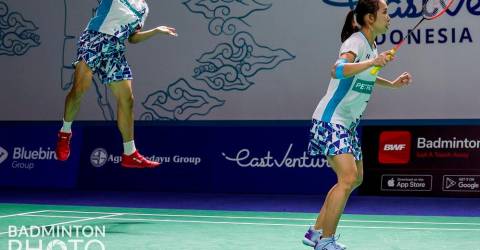 KUALA LUMPUR: The selection of professional players to fill the mixed doubles slot for the 2022 Commonwealth Games in Birmingham, England, augurs well to meet the target of two gold medals set by the Olympic Council of Malaysia (OCM)..

Badminton Association of Malaysia (BAM) doubles coach director Rexy Mainaky is optimistic that the target will be achievable based on the experience and performance of the current national professional pairings of Chan Peng Soon-Cheah Yee See and Tan Kian Meng-Lai Pei Jing.

He said the selection of professionals did not mean that BAM was bypassing players under the parent body, but rather it was the best selection on merit based on the present group of shuttlers.

“The new mixed doubles (BAM) pair was pretty good at the Indonesian Open but not yet champions (material), like what we can see of the national professional mixed doubles pair of Kian Meng-Pei Jing who once won the Korean Open when the Malaysians defeated the host pair.

“We also have Peng Soon-Yee See but for the Commonwealth Games we cannot list 10 players like in the Thomas Cup and Uber Cup … hence, I see Yee See can also play in various events,“ he said when met at the Akademi Badminton Malaysia (ABM) in Bukit Kiara here recently.

Peng Soon-Yee See and Kian Meng-Pei Jing are currently the country’s best mixed doubles pairing with each currently ranked eighth and ninth in the world ahead of the 2022 Commonwealth Games from July 28 to Aug 8.

Asked to give a hint if he would field a ‘scratch pair’, Rexy, who is also the 1996 Altanta Olympic Games men’s doubles gold medallist, merely replied that “it’s a secret”.

For the record, in the 2018 edition, the national badminton squad took home one silver via mixed team and two bronze via men’s and mixed doubles. – Bernama