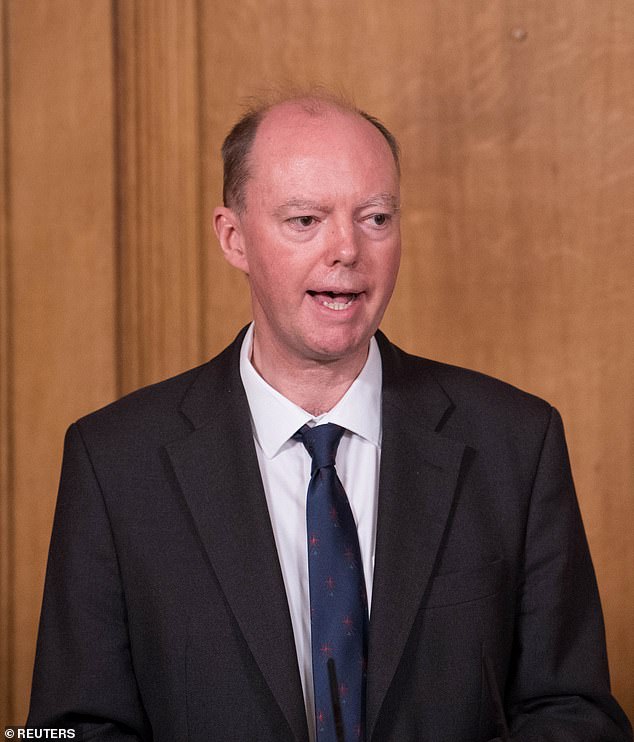 Professor Chris Whitty is pushing for a new two-week national lockdown amid concerns the true number of coronavirus cases is far higher than being reported, a former World Health Organisation expert claims.

Anthony Costello, who sits on the independent SAGE panel, made the statement on Twitter on Wednesday evening, adding that daily infections could be as high as 38,000.

It comes after Boris Johnson insisted he was doing ‘everything in my power’ to avoid plunging the country back into blanket restrictions, voicing fears that we could not ‘afford’ it.

But he acknowledged he could not dismiss the possibility, conceding there is ‘not enough’ capacity for screening and pleaded for people only to get checked if they have symptoms.

According to Mr Costello, the Prime Minister has been told by his Chief Medical Officer that such a move may be needed to stop the recent rise in infections.

He wrote: ‘I’m hearing from a well-connected person that government now thinks, in absence of testing, there are 38,000 infections per day. Chris Whitty is advising PM for a two week national lockdown.’

Sir Chris Whitty, pictured, is pushing for a new two-week national lockdown amid concerns the true number of coronavirus cases is far higher than being reported, a former World Health Organisation expert claims 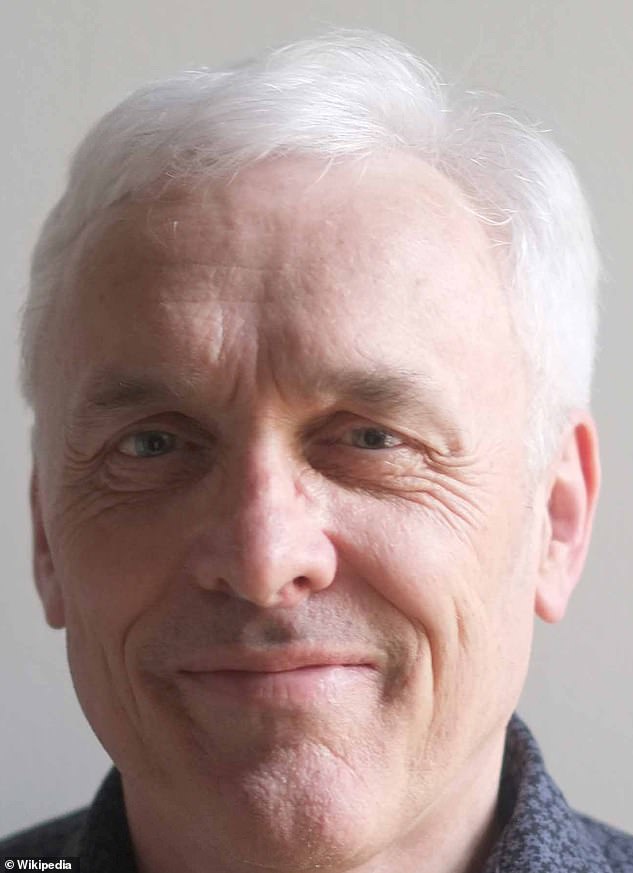 Anthony Costello, who sits on the independent SAGE panel, made the statement on Twitter on Wednesday evening, adding that daily infections could be as high as 38,000

He wrote: ‘I’m hearing from a well-connected person that government now thinks, in absence of testing, there are 38,000 infections per day. Chris Whitty is advising PM for a two week national lockdown’

Britons ‘could face curfews within weeks’

Britons could face an even tougher lockdown within two weeks unless the Rule of Six brings down coronavirus cases, it was claimed on Wednesday.

Ministers and government officials insist they are ready to take more draconian steps to stop the spread, despite a wave of criticism.

Options on the table could range from curfews to closing pubs – although there is a determination that schools will stay open.

‘Lockdown is the only thing that we know works, to be frank,’ one government science adviser told ITV.

The dire prospect has been raised amid fears that the disease is on the verge of spiralling out of control again.

Although cases have spiked over 3,000 a day, it had been mainly among younger people, who are less likely to be badly affected.

However, alarm has been sparked by early signs that hospitalisations are on the rise again, and infections are becoming more common among older people.

Coronavirus cases spiked again on Wednesday to 3,991 amid rising alarm that the UK is about to be hit with a second wave.

But there are concerns that the shambolic testing system means the UK faces ‘lockdown by default’, with schools forced to shut in case people with colds are carrying the disease, and workers unable to return to offices.

In a sign of the mounting chaos, the government has stopped publishing daily capacity figures – with the data now marked ‘N/A’.

Testing tsar Baroness Harding is also facing questions, with ministers demanding that schools are made a ‘priority’ and have ‘swift’ access to checks.

Despite previously boasting of ‘Moonshot’ plans to carry out 10million tests a day, Health Secretary Matt Hancock is now rushing to create a ‘priority list’.

However, putting hospitals and care homes first raises the prospect of schools being left in limbo, with teachers saying 740 have already been forced to close or send children home because so many have cold or cough symptoms.

Geoff Barton, general secretary of the Association of School and College Leaders, said headteachers were obliged to order that the ‘bubble has to stay at home’ if a pupil or teacher could not get a test to prove they were negative.

‘This will feel I think like lockdown by default – it will be more frustrating for parents because you can’t predict whether it is going to happen,’ he told BBC Radio 4’s Today programme.

The ASCL demanded that Mr Johnson ‘personally take charge of this situation in the interests of keeping our schools and colleges open, and protecting pupils and staff’.

Asked whether there was enough testing capacity, Mr Johnson replied bluntly: ‘No, we don’t. 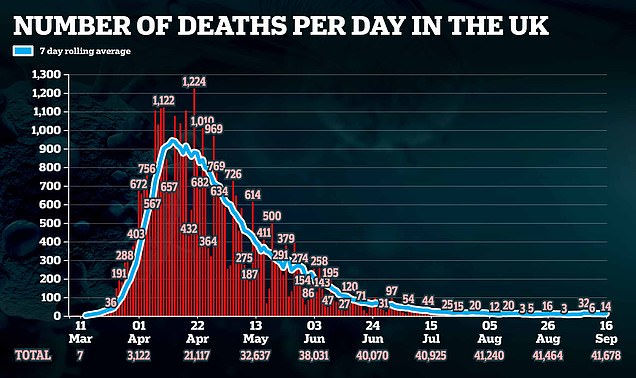 The UK has announced a further 14 Covid-19 deaths in the preliminary count, although the final figure can sometimes differ 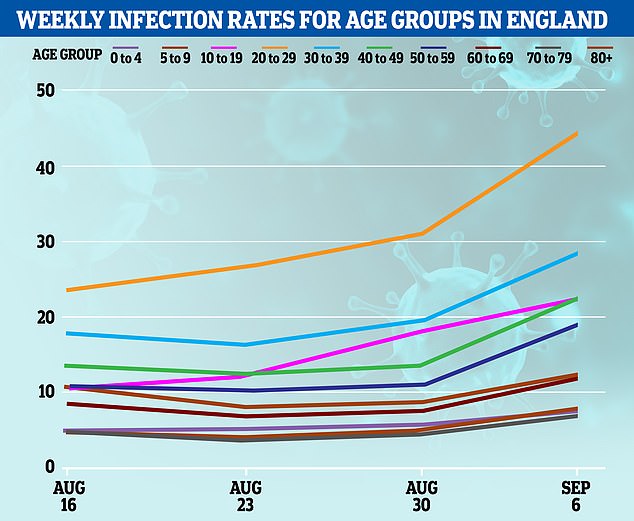 Public Health England (PHE) data reveals 23.4 cases are now diagnosed for every 100,000 people aged between 40 and 49 — up from 12.4 at the end of August. And coronavirus infection rates have nearly doubled in just a week for people in their fifties, jumping from 10.9 to 20

‘We don’t have enough testing capacity now because, in an ideal world, I would like to test absolutely everybody that wants a test immediately.’

He promised that there would be capacity for 500,000 tests a day by the end of October.

But he urged people without symptoms to stay away from testing centres – although he acknowledged the reasons why they may want to find out if they had Covid-19.

‘What has happened is demand has massively accelerated just in the last couple of weeks,’ he told MPs.

Professor Andrew Hayward, one of the government’s SAGE experts, said around half a million people every day could be expected to display symptoms similar to coroanvirus at this time of year, even before the pandemic appeared.

That would be far above the government’s current claimed testing capacity of around 375,000 – although they have never carried out that many in a single day.

Prof Hayward, director of University College London’s Institute of Epidemiology & Health, said: ‘The background to this of course is that we would expect the demand and the capacity to need to rise quite rapidly over the autumn and winter as the number of people who develop symptoms that could be Covid increase.

‘Some of our research has shown that at least in the winter, you would expect about half a million people a day to develop symptoms that are typical of Covid – and that would be in a winter when there was no Covid – so you can see that the capacity requirements will have to increase dramatically if we are going to keep up.’