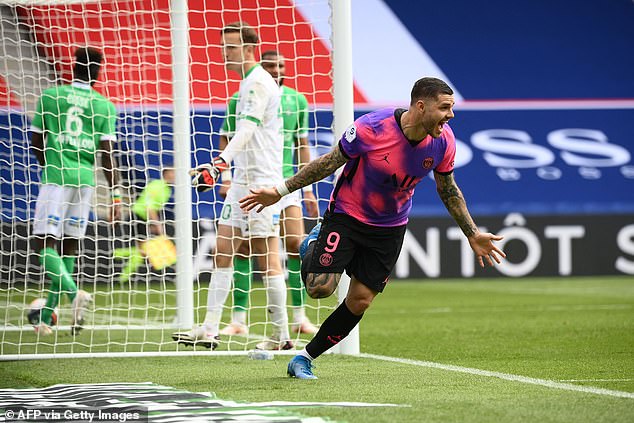 PSG 3-2 Saint-Etienne: Mauro Icardi scores 94th minute winner as Mauricio Pochettino’s men move to within a point of Lille at the top of Ligue 1 after extraordinary late victory

By Matt Verri For Mailonline

Mauro Icardi was the 94th-minute hero as he scored a last-gasp winner to give PSG a 3-2 win over Saint-Etienne.

Denis Bouanga had given the visitors the lead after 78 minutes, but Kylian Mbappe levelled things up within a minute and put PSG in front from the spot with three minutes remaining.

Romain Hamouma netted a 91st minute equaliser to seemingly earn his side a point, but Icardi still found time to score a dramatic late winner.

The result leaves PSG just one point off Lille at the top of Ligue 1, with five matches remaining this season.