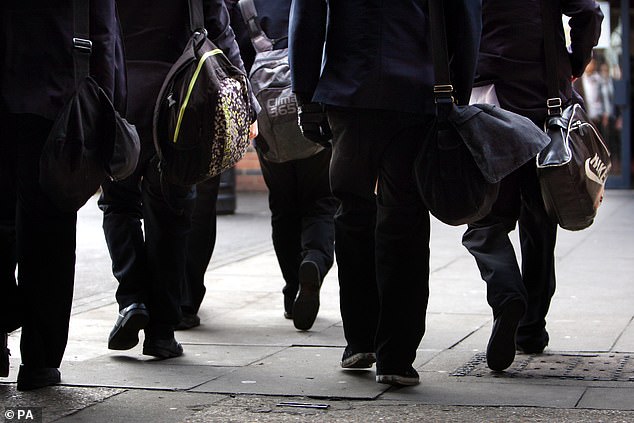 By Eleanor Harding and Sarah Harris for the Daily Mail

Pupils face a ‘Wild West’ scramble for sixth form places today as tens of thousands are predicted to miss out due to a record fall in top GCSE grades.

The plunge in top grades will affect an estimated 75,000 pupils, while about 50,000 fewer are expected to get at least a basic pass in six GCSEs. Sixth forms usually ask for at least four passes.

‘My worry is [that] poorer pupils who have just missed out on grades will now miss out on a sixth-form place that could mean so much for their future prospects.’

The drop is due to grade inflation being reined in after teachers decided grades during the pandemic.

Last night it also emerged that 7,000 BTec students may not get their results from Pearson today.

More information is needed from schools and colleges before results can be issued.

The plunge in top grades will affect an estimated 75,000 pupils, while about 50,000 fewer are expected to get at least a basic pass in six GCSEs

‘For those who now need to resit in the autumn we need to ensure they do not feel like they have failed and give them the support they need to succeed..’

Paul Whiteman of school leaders’ union NAHT, said: ‘The impact of the pandemic has not been felt evenly by everyone – some students and some schools will have experienced more disruption than others.

‘It is important that everyone bears this in mind and takes into account each student’s, and each school’s, particular circumstances.’

Many sixth forms are selective, and cream off students with the best grades.

For example, Harris Sixth Form in Croydon, which aims to send students to Oxbridge, asks for a ‘grade 8 average’ – the equivalent of a high A or low A* – to study 4 A-levels.

Even non-elite school sixth forms usually ask for at least 4 or C grades.

GCSE grades in England were changed from an alphabet to numerical system in 2017, but Wales and Northern Ireland retained the letters. Scotland is not included in the figures.

Of all entries, 230,000 fewer are expected get at least a 7/A this year compared with last year, while the number getting at least a standard pass – grade 4 or C – will drop by 280,000, according to an analysis by Alan Smithers, professor of education at Buckingham University.

Education Secretary James Cleverly said: ‘Congratulations to everyone getting their results today.

‘Pupils should be incredibly proud of their achievements, especially given the unprecedented disruption they have faced over the last couple of during the last two years.

‘I also want to thank our brilliant teaching profession – and of course parents and carers – for all they have done to ensure young people can progress onto the next stage of their lives.

‘So whether that’s one of our pioneering T Levels, A levels, or an apprenticeship, pupils should know they have the best possible range of options available to them once they finish their GCSEs.’