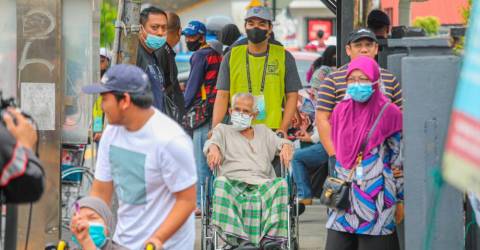 KUALA LUMPUR: A group of people with disabilities (PWD) and senior citizens decided to put their ‘inadequacies’ aside to cast their ballots in the 15th general election (GE15) after realising the importance of voting for an elected representative.

In PERLIS, Mohd Khairul Afiq Abdul Razak, 33 who is deaf and unable to speak, was accompanied by his younger brother, arrived early at the Sekolah Kebangsaan (SK) Lubuk Sireh Padang Besar polling centre.

“Abang Afiq (Mohd Khairul Afiq) is very passionate and wanted to come early to the polling station. He can also understand that the votes are confidential and he shows it by pointing a finger in the mouth to indicate his vote is secret,“ said his brother Mohd Amil Abdul Razak, 22, when met by Bernama today.

Mohd Khairul’s mobility at the polling station was made easier with the assistance of Election Commission (EC) officers by providing a wheelchair for Mohd Khairul during the voting process.

Meanwhile, in KEDAH, 29 year-old Mohd Rahmat Abd Somat, who is handicapped had to endure walking 100 metres with a prosthetic leg to cast his ballot at Sekolah Menengah Kebangsaan (SMK) Jabi, Pokok Sena.

In TERENGGANU, teenager Mohd Ameir Idham Mohd Khalid,18, did not consider his handicap as a hindrance for him to cast his ballot at Sekolah Kebangsaan (SK) Kuala Jenderih in Telemong, today.

Mohd Amier lost his leg in a road accident in 2019 and a first-time voter is determined to pick a leader who he says is capable of championing the development agenda for the younger generation.

In SELANGOR, former teacher, Rosli Mohamad Dani, 57 who is partially paralysed and unable to speak, had to be ferried by ambulance to the SK Seksyen 17 polling centre, Shah Alam for him to cast his vote.

His wife, Rosnah Mahmud, 54, said despite not being able to speak, her husband would make body movements informing her that he was ready to go to the balloting centre to vote which was done in an ambulance with the help of an EC officer.

In PUTRAJAYA, a visually disabled person Ramina Abdul Manap, 62, was seen at the polling centre at Sekolah Kebangsaan Putrajaya Precinct 9 (1) here, as early as 8 a.m., accompanied by her son, Mohd Adib Kamaruddin, 35.

According to Mohd Adib, even though his mother could not see the face of the candidates who were contesting the Putrajaya parliamentary seat, she had already decided who to choose as her representative.

In PERLIS, Che An Che Don,75, arrived at Sekolah Kebangsaan Bintong, Kangar with his two grandchildren to cast his vote.

“Initially I was embarrassed because I walk with a hunch but as a responsible citizen, I force myself to come and vote,” said the man who hails from Kampung Wang Besar, Kangar.

In PERAK, Fatimah Mat, 91, from Kampung Attaduri, Langkap was escorted by her daughter and aided by an EC worker to vote for Sungai Manik state and Pasir Salak parliamentary seat.

“As far as I can remember, I have never shirked from performing my duty, especially in the general elections,” he said.

And finally, in NEGERI SEMBILAN, Zaharah Bujal, 72, said she was excited to be able to cast her ballot at Sekolah Menengah Agama Haji Mohd Yatim in Rembau at GE15.

“I can’t wait to vote for the 14th time. Despite the knee pain, I still went out to vote with my children and siblings as early as 8 am,“ she said.

In PENANG, senior citizen Abdul Rahman Ahmad, 70, cycled for over seven kilometres from his house in Tanah Liat to SK Seri Penanti to cast his vote for the Permatang Pauh parliamentary seat. – Bernama