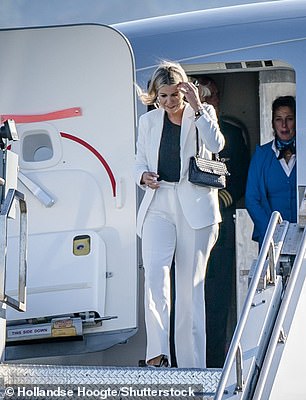 Queen Maxima has kickstarted her tour of the US with a very stylish airport look this morning.

The Dutch Royal, 51, touched down in San Francisco today ahead of a three-day visit which will see her travel from California to Texas.

As she stepped out of her plane, Maxima was seen sporting a stylish white trouser suit with a black top and black slip-on heels with a black clutch bag.

The mother-of-three was meant to go on the tour with her husband, King Willem-Alexander, however, she has been forced to continue alone after he contracted pneumonia last week. 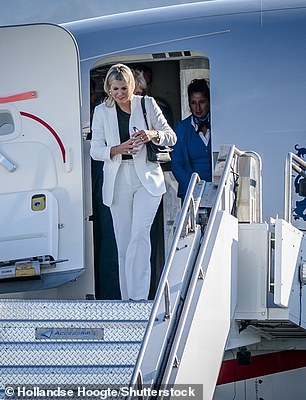 Queen Maxima, 51, has kickstarted her tour of the US with a very stylish airport look this morning as she touched down in San Francisco 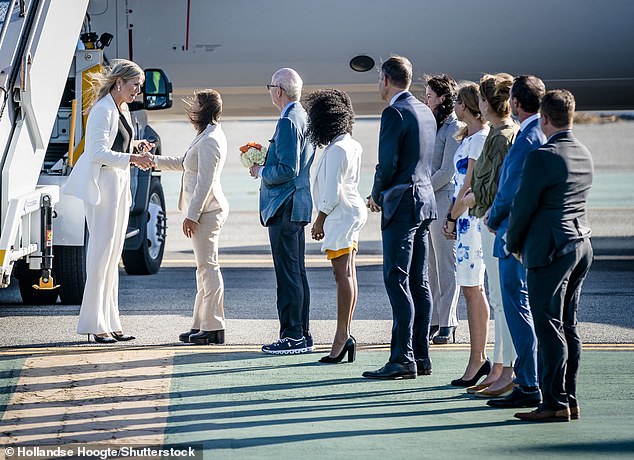 Maxima, was looked refreshed after her transatlantic flight, was greeted by Eleni Kounalakis, Lieutenant-Governor of California

Looking fresh in spite of her overnight flight, Maxima was as glamourous as ever as she appearance at the plane’s door.

She paired a white trouser suit with a blazer with a sleek one-shoulder black top and a black leather shoulder bag.

The royal completed the look with a sleek pair of black leather slip on heels, and a pair of sunglasses.

Maxima added a touch of bling to the stylish look with drop pearl and diamond earrings, and a sparkling ring on her left hand.

Her blonde locks were styled in a luscious blow-dry tucked behind her ears, which were ruffled by the fresh Californian air as she touched down. 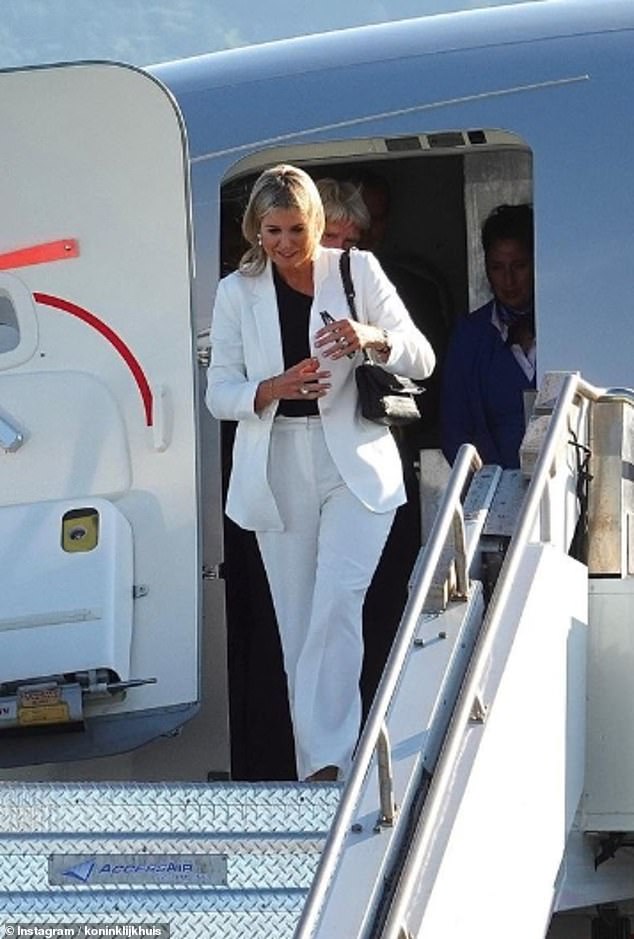 In spite of flying overnight, the mother-of-three was a vision as she stepped out of the royal plane 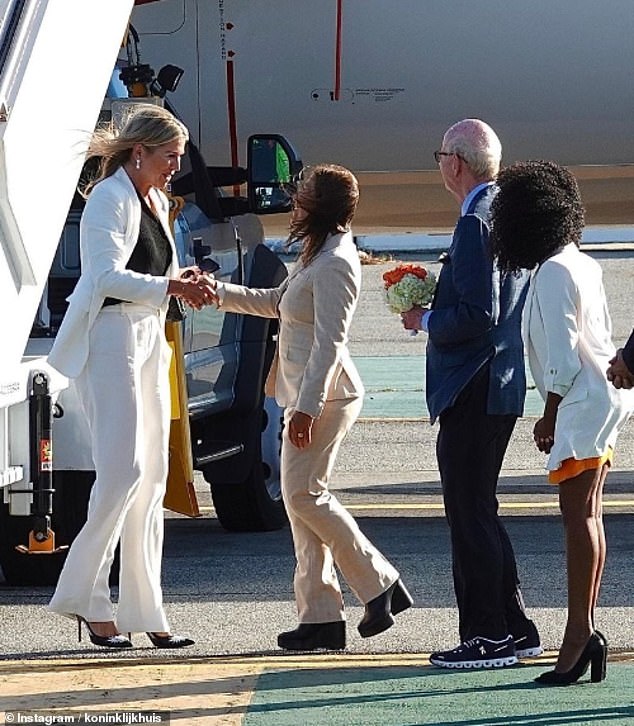 As she stepped out of her plane and hopped onto the Californian tarmac, Maxima was seen sporting a stylish white trouser suit with a black top and black slip-on heels with a black clutch bag 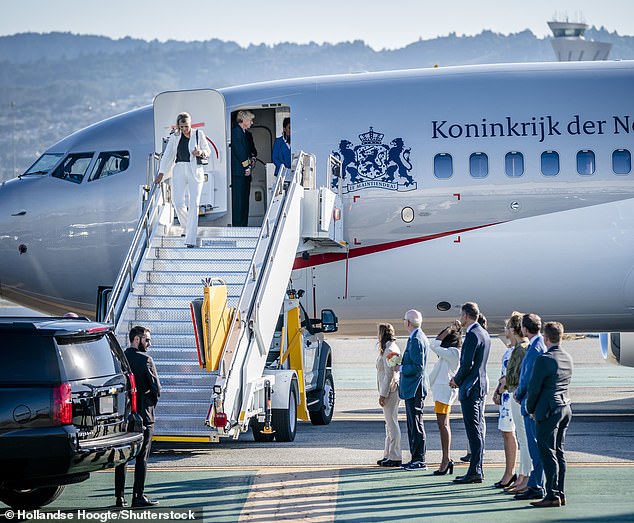 Armed with her usual charm, the mother-of-three shook hands with the welcome committee who had come to greet her at the airport.

The Dutch royal’s visit aims to reinforce the strong trading relationship between The Netherlands and the US, the Dutch royal household said.

‘The United States is the most important partner in the NATO alliance and also an important partner when it comes to climate change, energy transition, mobility, urbanization and healthcare,’ the post continued.

‘This cooperation is essential to guarantee security and prosperity in the Kingdom of the Netherlands. 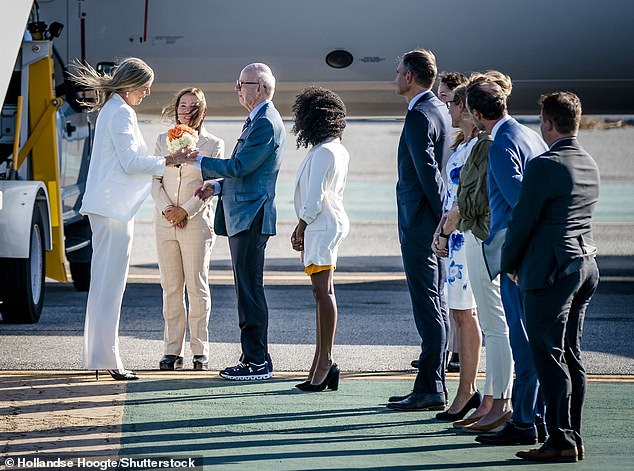 The Dutch Queen was handed some flowers  by Dutch Ambassador Andre Haspels of Washington and Eleni Kounalakis, Lieutenant-Governor of California 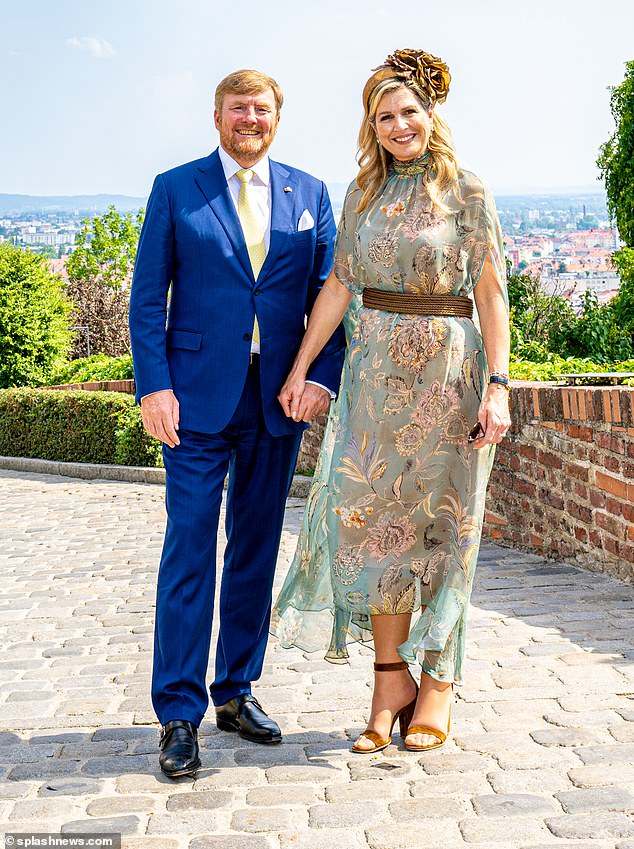 Maxima was meant to travel to the United States with King Willem-Alexander, however, it was announced last week that he pulled out for health reasons after contracting pneumonia (pictured together in June)

It was revealed last week that Willem-Alexander, who was meant to travel with Maxima, wouldn’t be making the trip.

‘His Majesty King Willem-Alexander will not participate in the working visit to California and Texas from 6 to 9 September 2022,’ the palace said in a statement at the time.

‘This decision has been made on doctors’ advice. The King is recovering from pneumonia, and air travel at this time could impede a full recovery.’

Máxima’s visit to the US only comes a few weeks before the Duke and Duchess of Cambridge are meant to make their own trip to the US later this month.

Prince William and Kate Middleton, both 40, are expected to attend the Earthshot Prize Innovation Summit in New York on September 21, kicking off the countdown to December’s Earthshot Prize awards ceremony which is taking place in Boston this year.

The Duke of Cambridge announced the US will be hosting the Summit earlier in July, saying: ‘Now, I hope you agree, that London and the UK has put on quite a show for our first year, so for the second year, we need to pass the baton to a country whose leadership is essential for all five of our Earthshots.

‘Where better than the nation that inspired the Moonshot all those years ago?’ he added.