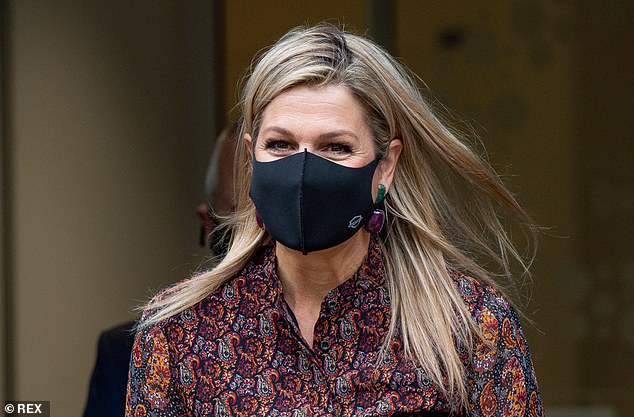 Queen Maxima’s smile was back on – albeit tightly covered by a face mask – today during her first official outing since her public apology for taking a lockdown holiday to Greece.

The Queen of the Netherlands, 49, visited a GP practice in Drierbergen, to learn about the challenges family doctors are facing during the pandemic.

Dressed in autumnal colours and wearing a black mask, Maxima was in typically sunny form as she headed to the practice and met with its staff.

The Dutch royal and her husband King Willem Alexander faced public criticism for their decision to travel to Greece for a holiday earlier this month, while their country is experiencing a second wave of Covid-19 and people were being advised to stay at home.

Queen Maxima of the Netherlands, 49, put on a show of good faith today as she visited a GP practice in Drierbergen, following all the sanitary rules to a T 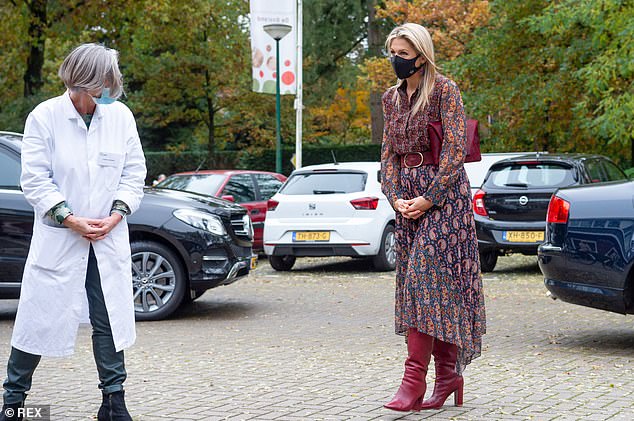 For today’s outing, the monarch looked striking in a 70s inspired paisley dress, cinched at the waist with a velvet burgundy belt.

Known for her love of matching accessories, the mother-of-three was wearing a pair of heeled leather boots in the same colour, and a velvet clutch bag in burgundy too.

While she emerged of her chauffeured car without a mask, she swiftly put one on, expertly tucking her bag under her arm.

Her blonde locks were styled in a neat blow-dry which laid elegantly on her shoulders, and she put the focus on her eyes with some eyeliner and mascara. 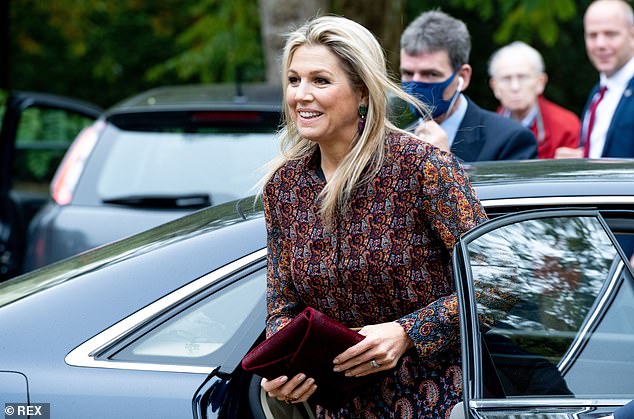 Maxima was not wearing a mask as she arrived at the GP practice earlier today, but she quickly pulled one out 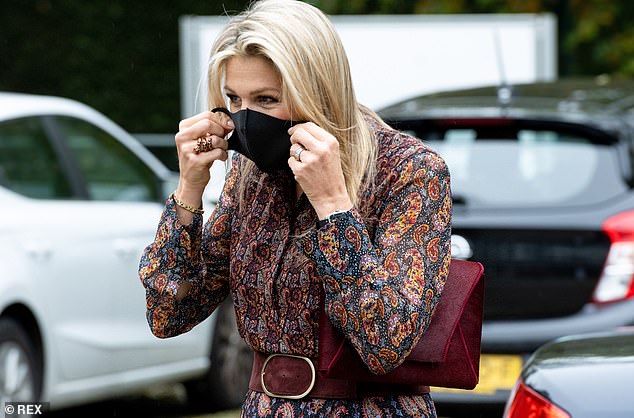 The Dutch queen abode by all the sanitary rules in place to slow the spread of the virus, from keeping her distance to wearing a face covering

During her visit, Maxima maintained a two-metre distance as she asked staff members questions about their work.

She also watched as a patient was being administered his flu shot by a nurse.

Her visit was designed around finding out how GPs and nurses are coping with both coronavirus and organising the annual flu vaccination campaign.

While her lips were hidden from view, it was evident that smiling Maxima was enjoying being out with the public after keeping a low profile for a week following public backlash over her family holiday.

The couple were forced to publicly apologise eight days ago, after they were fiercely criticised by the public for travelling to Greece in spite of  a spike in Covid-19 cases around the country. 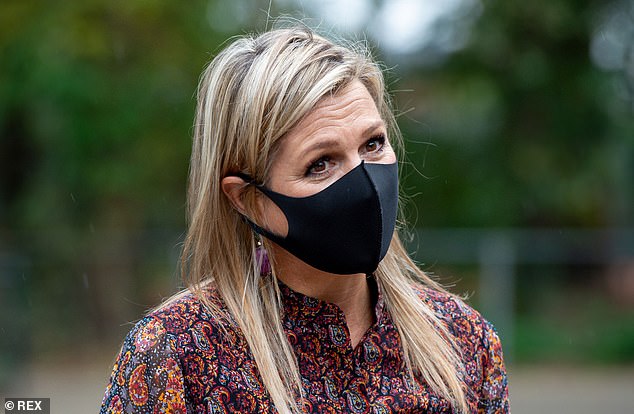 Maxima’s hair was styled in a perfect blow-dry, and a dash of make-up complimented her natural low 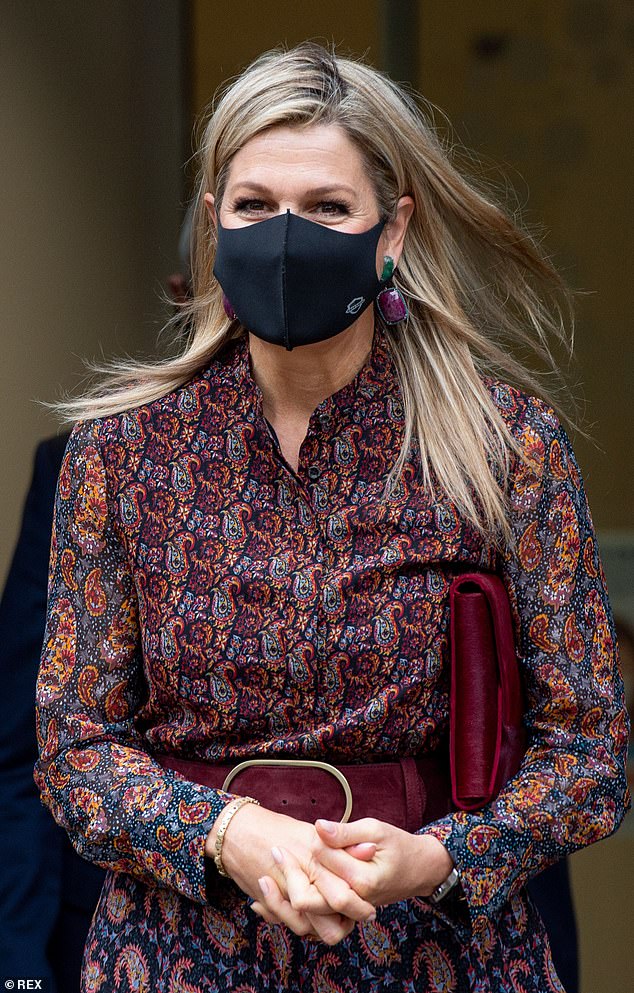 In spite of the social distancing and regulations, Maxima looked in good spiritis during her outing

During a broadcast, Maxima sat next to Willem-Alexander  Dutch royal family regretted going on holiday despite a partial coronavirus lockdown in the Netherlands, admitting ‘it hurts to have betrayed’ people’s trust.

The Dutch king and queen cut short a holiday to their private villa on the Peloponnese peninsular of Greece on Saturday, a day after departing from Amsterdam on a government jet. 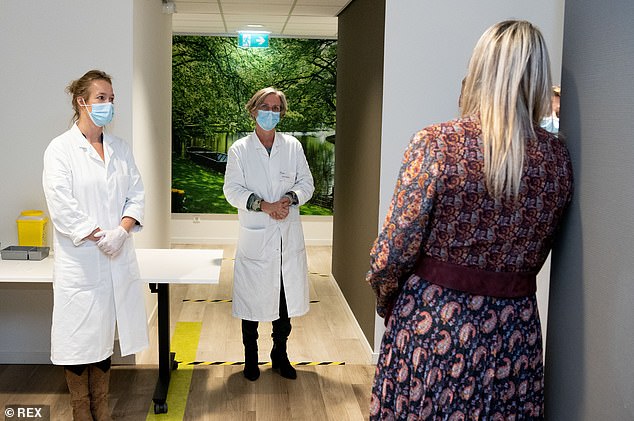 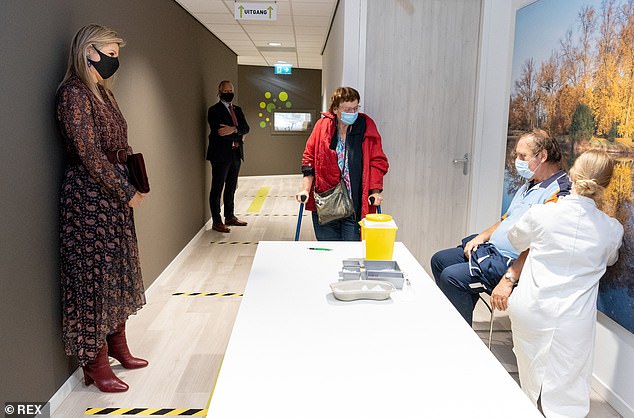 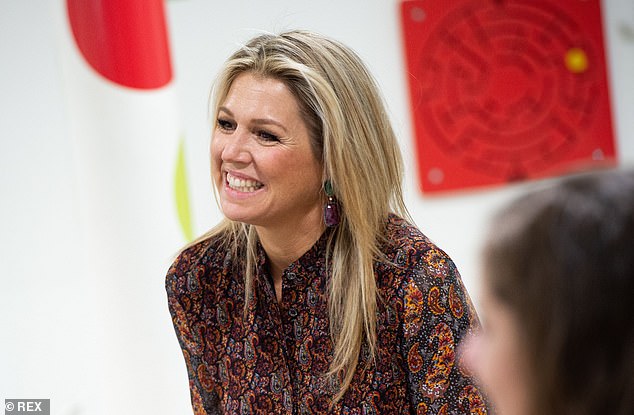 Once inside in a meeting room, Maxima took out her mask and delighted attendees with her usual good spirits

‘Our journey to Greece has provoked strong reactions from many Dutch people. It hurts to have betrayed your trust in us,’ the king said.

‘Our own decision to return was made with the realisation that we should not have gone.

‘From the start of the coronavirus, we have done our best. It is a difficult time for everyone.

‘We are part of this. But we are not infallible.’

The king, queen and their youngest daughter Ariane returned on Saturday, while their two eldest daughters, Alexia and future-queen-to-be Amalia came back on Tuesday, according to the NOS public broadcaster.

The trip came while people were being urged to stay at home due to the coronavirus pandemic. 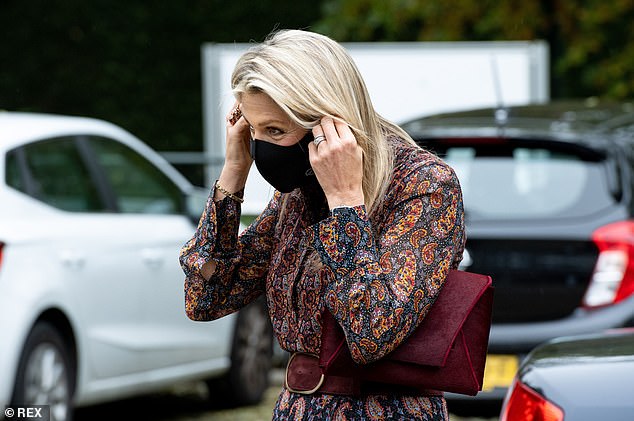 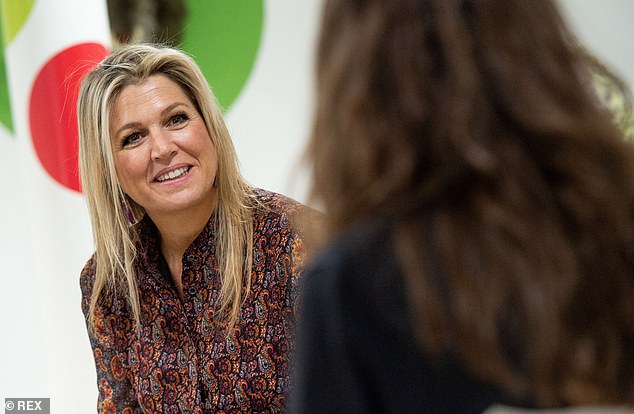 The Queen listened intently during her visit at the practice. She seemed enthusiastic about meeting the staff