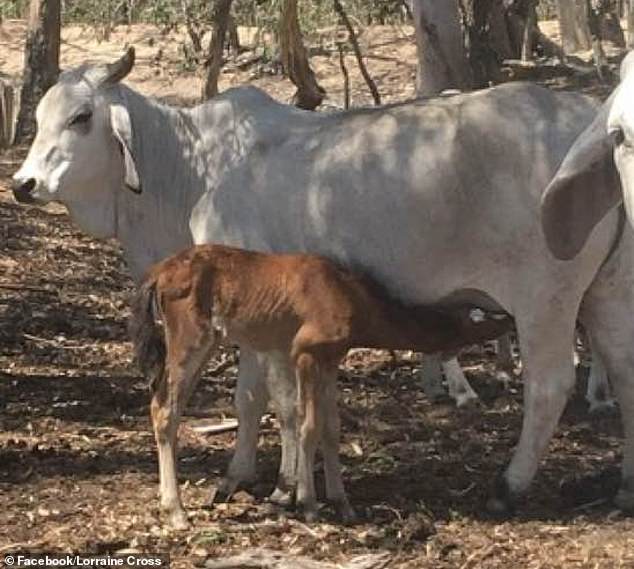 Cow happily adopts, feeds and bathes orphaned wild foal on cattle station with the unlikely pair even talking to each other: ‘Never seen that in my life’

A remote cattle station owner was shocked when he discovered one of his prized Brahman cows had adopted an orphaned brumby foal.

Far north Queensland grazier Rob O’Shea was inspecting his herd at his remote Mount Garnet cattle station when he spotted the wild foal with a cow.

‘The little foal was sucking the cow … I’ve never seen that in my life before,’ he told the ABC.

‘That cow is worth her weight in gold. Looks like she would take anything on to rear it.’

Mr O’Shea said the cow had never calved before – meaning she had never given birth to babies – but she was more than happy playing the role of stepmother to the wild horse.

Mr O’Shea said the foal had quickly adjusted to living with the cows and it often responded to their moos with its own whinnies.

The grazier confirmed the orphaned foal also slept with the calves and had become just another baby cow to the herd.

‘It whinnies to the cow and the cow bellows and answers it,’ Mr O’Shea said.

‘She bathes it and she’s made a real mother of it.’

Brahman cows are a major beef breed across dry areas of Australia. They are regarded as being intelligent, inquisitive but shy animals.

A social media post about the odd pair went viral on Facebook with hundreds commenting on the ‘cute’ relationship.

‘Whoever I showed it to, they’ve never seen it in their life and probably will never see it again,’ Mr O’Shea said.

James Cook University associate professor of animal reproduction John Cavalieri said it was highly unusual for cows to look after any young that’s not their own.

Horse foals require about 20 to 25 per cent of their body weight in milk every day so it makes sense the young horse was drawn to cow.

Dr Cavalieri said cow’s milk, as well as goat’s milk, can be used as a substitute when raising an orphaned foal but it’s not as lactose-rich.

Sadly, the healthy foal was given to a new home.