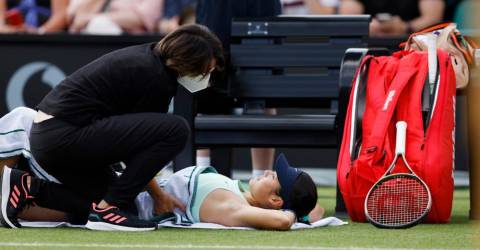 LONDON: US Open champion Emma Raducanu expects to be fit to feature at Wimbledon despite pulling out of the WTA event in Birmingham following her latest injury setback.

Raducanu’s Wimbledon preparations suffered a blow when she was forced to retire from her Nottingham first round match against Viktorija Golubic on Tuesday.

The 19-year-old lasted only seven games before a side injury ended her first appearance on home turf in Britain since winning the US Open last year.

Raducanu admitted after the match that she had “no idea” if she would recover in time to play at Wimbledon.

But a scan appears to have allayed those fears and the British number one is confident of making it to the All England Club, even though she won’t risk playing in Birmingham next week.

“It was disappointing to go out this week with a side injury and unfortunately will no longer be able to play in Birmingham,“ Raducanu told lta.org.uk on Wednesday.

“I’m looking forward to being back on the match court soon though to enjoy the rest of the grass season.”

While Raducanu will no longer feature in Birmingham, she could enter the Eastbourne event, which takes place a week before Wimbledon starts on June 27.

In Raducanu’s opening season on the WTA tour, she has been plagued by a number of fitness issues with hip and back complaints coupled with blisters during the past few months.

Raducanu has been forced to retire from matches three times since her stunning run from the qualifying rounds to US Open glory in New York. – AFP