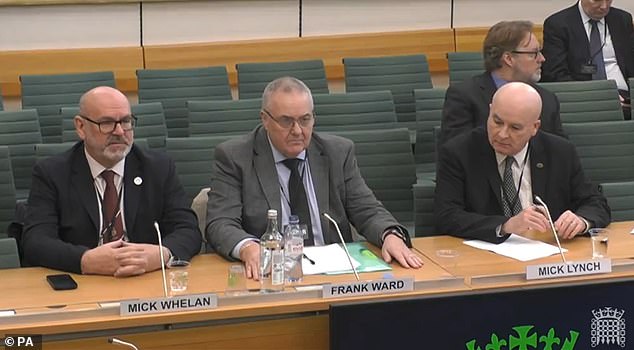 Rail union barons boasted about their popularity today as they warned that talks to end strikes were going backwards.

In a combative session before MPs, RMT chief Mick Lynch dismissed signs that public support for industrial action has been waning.

He told the Transport Committee he was a ‘more popular person than many of the politicians in this room’.

Meanwhile, ASLEF general secretary Mick Whelan gave a gloomy assessment of the prospects for a resolution to the long-running dispute.

‘We’re further away than when we started,’ he said.

The rail network was crippled again last week as staff took part in a series of walkouts over demands for double-digit pay rises.

Rishi Sunak yesterday unveiled new laws that would force the unions to guarantee a ‘minimum service level’ even when they strike.

However, it is likely to be around a year before the measures can be put into effect. 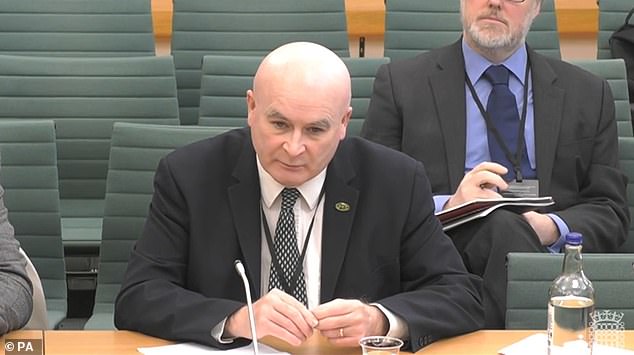 In a combative session before MPs, RMT chief Mick Lynch (pictured) dismissed signs that public support for industrial action has been waning

Separately, up to 25,000 ambulance workers across England and Wales have gone on strike today in a dispute over pay.

Paramedics, call handlers, drivers and technicians from the Unison and GMB unions are taking part in staggered strikes across a 24-hour period.

It comes as 14 health unions, representing more than a million NHS staff, said they will not submit evidence to the NHS pay review body for the next wage round ‘while the current industrial disputes remain unresolved’.

Instead, the unions, which represent ambulance staff, nurses, porters, healthcare assistants, physiotherapists and other NHS workers in England, called for direct pay talks with ministers.

NHS Providers has warned the NHS will be hit harder by today’s strike than one held in December as more staff, including call handlers, are involved.

He rated the progress towards resolving the dispute with the RMT on a scale of one to 10 as ‘seven’, after an offer was rejected last month.

He told the Transport Select Committee: ‘For RMT, 36 per cent of their members that are Network Rail employees voted yes for the deal. So, we’re a bit short of the 50 per cent that we need.

‘It’s couple of thousand people that need to change their vote.

‘We met again with the RMT leadership yesterday for discussions and we’re planning to meet again next week.

He added: ‘I think there’s every chance by some very carefully targeted discussions at achieving (the 50 per cent).