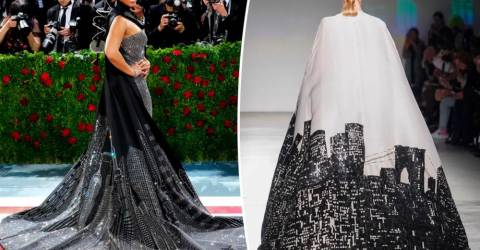 THE Met Gala is fashion’s biggest night and this year’s event which took place on May 2 was no different. However, many netizens noticed a familiar look on the red carpet, and it wasn’t Kim Kardashian’s Marilyn Monroe look.

Instead, it was Ralph Lauren’s flowy dress with a cape featuring the New York City skyline worn by Alicia Keys. On the red carpet, Keys said that she and Lauren were inspired by the Big Apple, since both her and Lauren were from New York.

“My inspiration is our city … We just wanted to bring New York to the gala.”

Sharp-eyed fashionistas couldn’t help but point out that it looked like Malaysian designer Datuk Zang Toi’s skyline cape from his 2009 Spring collection which was also featured again during 2020 at New York Fashion Week.

Many netizens pointed out that it wasn’t the first time Lauren was called a copycat either. In 1994, Ralph Lauren was ordered to pay US$350,000 (about RM1.5 million) to Yves Saint Laurent for copying a tuxedo dress.

“My cape was inspired by my love for my adopted home, New York City,” Zang shared, noting his inbox has been flooded with fashion lovers pointing out the similarities to his original design. “I came [to New York] 41 years ago with $300 (~RM 1312) to study at Parsons School of Design and I wanted to show my love and appreciation for the city that embraced me and allowed me to live the American Dream.”

The Kelantan-born designer responded by saying that it was a compliment for another designer to copy him. “If a giant brand name company such as Ralph Lauren would copy a small town boy from Malaysia, it’s a high form of flattery. It is proof that you are good at your craft when someone copies your work.”

Zang also took to his Twitter page to call out Lauren on the similarities of their capes. “Ironically, I opened my F2020 Runway Show with the great Alicia Keys’ Empire State of Mind. Team Ralph Lauren are paying very, very close attention,” he wrote.

Perhaps great minds do think alike, but one thing is for sure, is that most importantly, it seems that the three (Zang, Lauren and Keys) share a common love for the city.