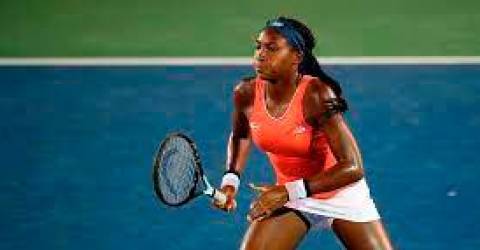 ADELAIDE: Teenager Coco Gauff(pix) moved a step closer to a third title on the WTA Tour on Thursday when she swept past Ana Konjuh 6-3, 6-4 and into the Adelaide semi-finals.

The 17-year-old American is the highest seed remaining at three as she ramps up preparations for next week’s Australian Open.

She was simply too good for the Croat, who is on the comeback after multiple elbow surgeries, converting four of 11 break points and dominating on her serve.

Her next challenge will come from either former US Open finalist Madison Keys or eighth seed Liudmila Samsonova.

“I’m super-excited for this year. I really do feel like I had a good pre-season and I feel really confident on the court,“ said Gauff.

“Even though the pre-season was two months, I feel like I improved so much during those couple months of training.”

Alison Riske, who is chasing a fourth singles title, also booked a spot in the last four when fellow American Madison Brengle retired hurt at 3-3 in the first set.

Riske will now face world number 31 and 2021 French Open semi-finalist Tamara Zidansek for a place in Saturday’s final after the Slovenian came through an epic battle against Lauren Davis 7-6 (7/4), 7-6 (9/7).

In the men’s draw, former US Open champion and fourth seed Marin Cilic progressed to the semis with a fighting 6-4, 2-6, 6-3 victory over American Tommy Paul.