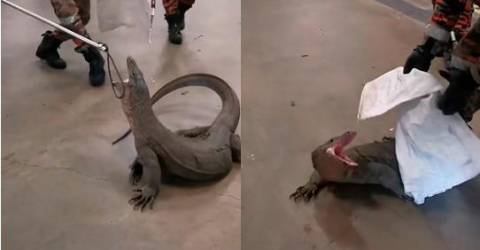 RECENTLY, a TikTok video went viral after a huge reptile was seen wandering around in the car parking lot of a supermarket in Ara Damansara.

The video uploaded by Fire Fighter Forever showed a group of firefighters circling a monitor lizard to catch it.

The monitor lizard first emerged from underneath a row of cars and looked scared when the firefighters surrounded it.

The reptile did put up a small fight, but there was no room for escape as one firefighter managed to pin down the animal with a canvas.

The incident amused netizens with some even asking whether the reptile was someone’s ex.

Some also expressed their concern that the monitor lizard’s habitat could be threatened, which might explain how the animal is being seen in places where it should not be.