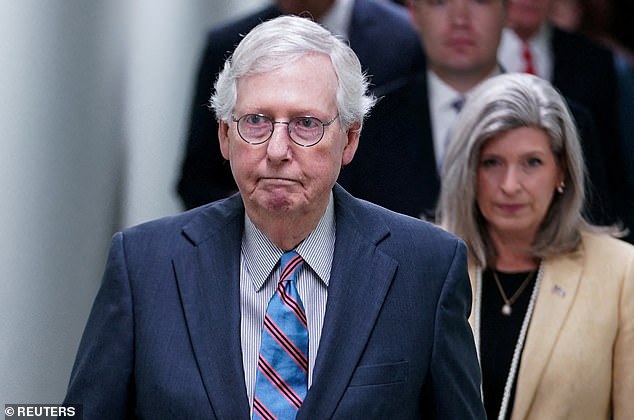 A number of Senate Republicans are publicly calling for next week’s leadership election to be delayed, as it’s still up in the air which party will control the upper chamber.

Georgia is already headed for an early December runoff, while votes are still being counted in Arizona and Nevada.

Republicans’ most likely path to the majority will be through Nevada and Georgia, as Arizona’s Democratic Sen. Mark Kelly looks likely to win his race against GOP hopeful Blake Masters.

‘The Senate GOP leadership vote next week should be postponed,’ suggested Florida Sen. Marco Rubio, who easily won reelection, on Twitter on Friday.

His tweet was met with agreement by a number of GOP senators Friday afternoon.

Senate Minority Leader Mitch McConnell may have to wait several more weeks to affirm he’ll still be in control of his party come January, as a handful of Senate Republicans want next week’s leadership election to be delayed 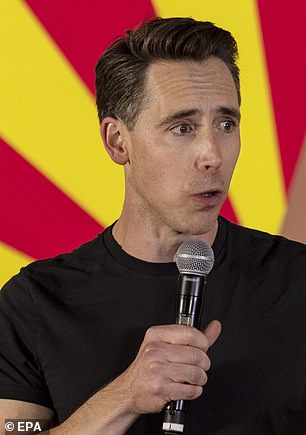 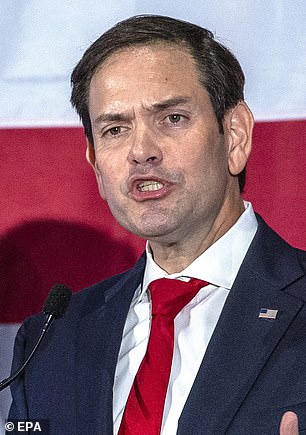 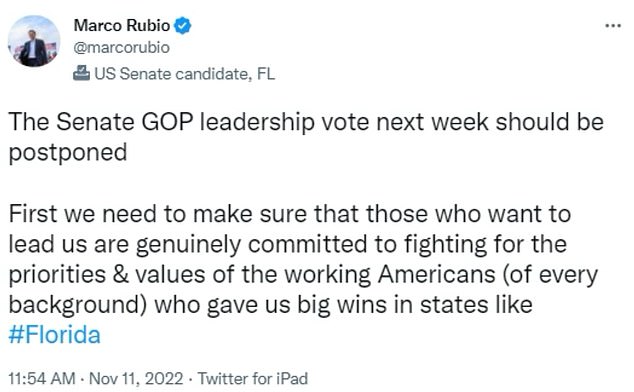 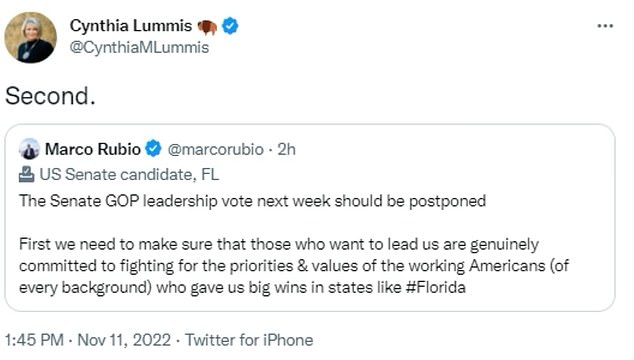 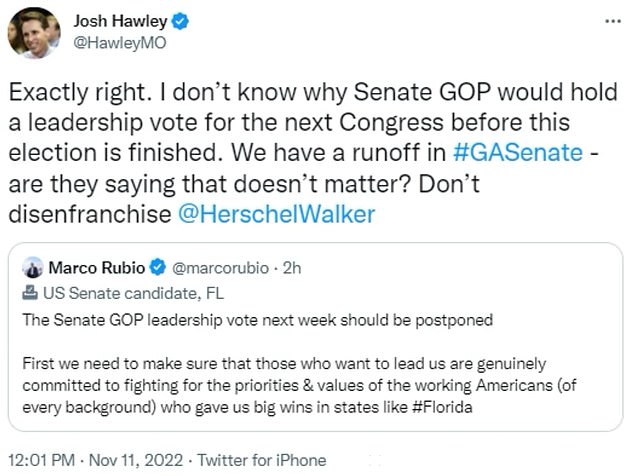 Sens. Josh Hawley and Sen. Cynthia Lummis agreed that next week’s Senate leadership election should be delayed. Votes are still being counted in Nevada and Arizona, while Georgia is headed to a runoff

Rubio said the next leaders of the Senate GOP should be ‘genuinely committed to fighting for the priorities & values of the working Americans (of every background) who gave us big wins in states like #Florida.’

While Missouri Sen. Josh Hawley questioned why a leadership election would be held before the votes are fully tallied.

‘Exactly right. I don’t know why Senate GOP would hold a leadership vote for the next Congress before this election is finished. We have a runoff in #GASenate – are they saying that doesn’t matter? Don’t disenfranchise @HerschelWalker,’ Hawley wrote.

Hawley has also indicated he would vote against Senate Minority Leader Mitch McConnell to serve as leader.

‘It makes no sense for Senate to have leadership elections before GA runoff. We don’t yet know whether we’ll have a majority & Herschel Walker deserves a say in our leadership,’ Cruz said. ‘Critically, we need to hear a specific plan for the next 2 yrs from any candidate for leadership.’

While former President Donald Trump was receiving most of the blame for Republicans underwhelming performance in the midterms, some Senate Republicans are grumbling about Senate Minority Leader Mitch McConnell too, the site said.

As of now, it doesn’t look like there would be enough votes to topple McConnell – and there’s no GOP senator who’s emerging as an ideal challenger.

Scott, who led the National Republican Senatorial Committee this cycle, at one point flirted with taking on McConnell, but he provided Democrats with several convenient talking points through the races – including that he wanted social safety programs like Social Security and Medicare to be renewed annually.

He also pushed that every American should be paying some in federal taxes, which Democrats advertised as Republicans wanting a giant tax hike.

McConnell, on the other hand, prepared Republicans for potentially staying in the minority by openly questioning candidate quality, after Trump backed Dr. Mehmet Oz, a former television personality, and Herschel Walker, an ex-college and NFL football player, among others.

Oz lost Republicans a Senate seat, in his Pennsylvania race against Lt. Gov. John Fetterman, while Walker is headed to a runoff against Democratic Sen. Raphael Warnock.

‘I don’t anticipate that there would be a leadership change, based on doing my own mental vote count on that question, but I do think there’s going to be a sea change in terms of how much power he has as the leader,’ David McIntosh, the head of the powerful Club for Growth, told Politico.

A spokesperson for McConnell did not respond to DailyMail.com’s request for comment on whether the leadership elections would be delayed.