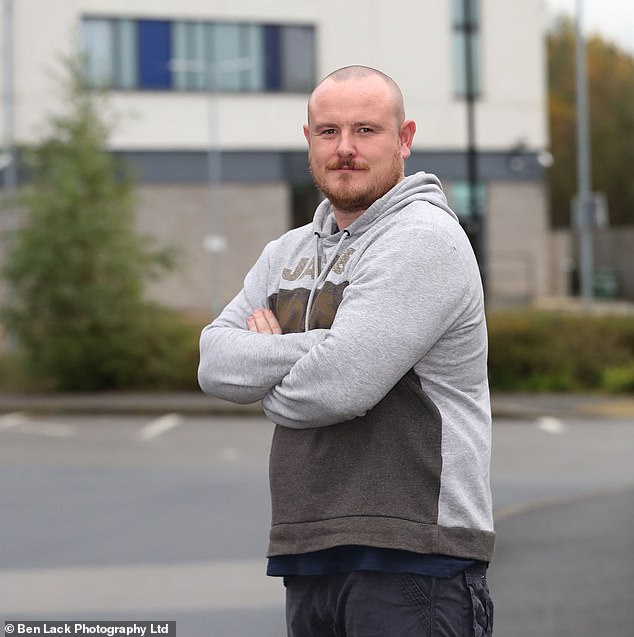 Angry residents have hit out at late-night music and raucous football tournaments at a Holiday Inn Express that is housing 130 asylum seekers.

They claim there has been ‘really loud music all night long’ at the site in Rotherham, South Yorkshire, after refugee families were relocated and young men were housed at the hotel instead.

Footage has emerged of people partying in a car park and having all-night five-a-side football tournaments.

John Healey, MP for Wentworth and Dearne, said the Holiday Inn contract had been extended and argued the hotel was ‘utterly unsuited’ as accommodation for the refugees as it is seven miles from Rotherham town centre and lacks NHS capacity.

‘It is clear that the use of hotels as accommodation for those seeking asylum in the UK is a direct result of a failing and unfair asylum system,’ said Mr Healey.

Joe Theaker, 35, who lives by the hotel, called for a curfew as he said his children cannot sleep as a result of the noise.

Joe Theaker, 35, who lives by the hotel in Rotherham, South Yorkshire, has called for a curfew as he said his children cannot sleep due to the noise

Mr Theaker, an HGV driver with a ten-year-old son, often drives past the hotel in Manvers Way between ten and midnight.

He said: ‘They are just bored so they sleep in the day and come out at night to play football with a music box blaring out.

‘We live by the hotel and we are struggling to sleep at night. They are playing football on the car park pretty much every night.

‘We cannot get the kids to sleep. It has been going on 12 months and the problems are just getting worse and worse.

‘The noise goes on from 9pm to the early hours. Most of the houses on the street have young families so we are all in the same boat.

‘It needs some kind of curfew. People have complained to the hotel and nothing has been done.

‘They are all young blokes in their early to mid 20s. Sometimes there are 20 to 30 around the car park.

‘We cannot get to sleep and when it is not playing we are anxious waiting for it to start and it is affecting the kids.’

Rob Seeds, 38, who has two kids aged one and eight and works as a renderer, said nearby houses were mainly occupied by young families and that they had had enough of the noise. 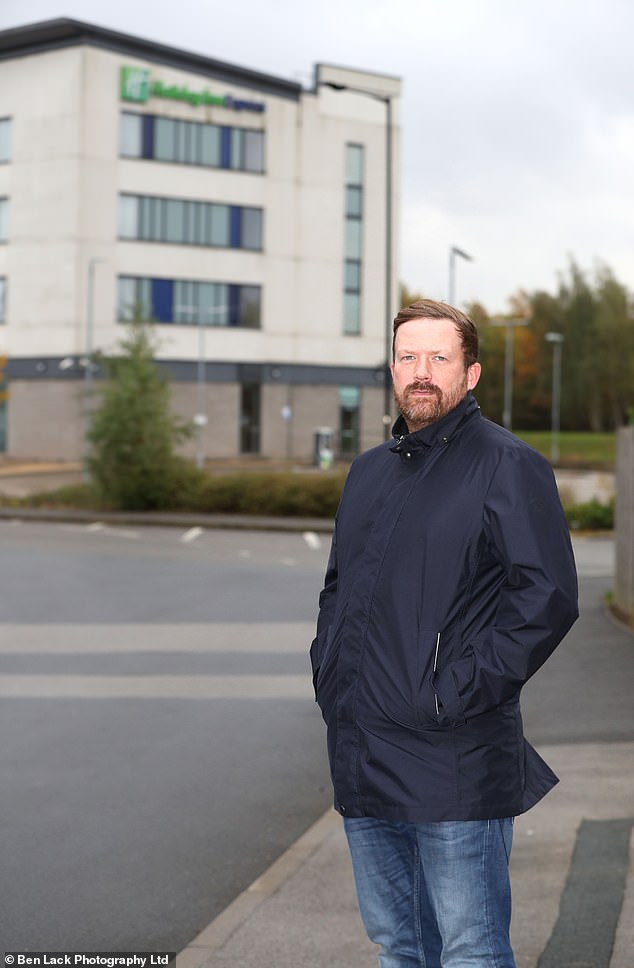 Rob Seeds, 38, who has two kids aged one and eight and works as a renderer, said nearby houses were mainly occupied by young families and that they had had enough 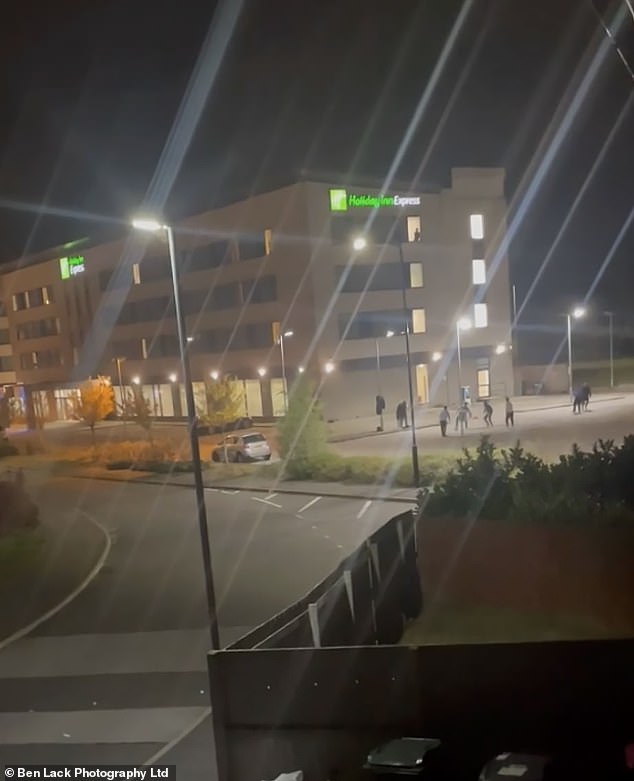 Mr Seeds said: ‘They are playing football all night long but that’s the least of it.

‘It is they’re playing really loud music while playing.

‘It echoes all down the street and around the estate until one or two in the morning.

‘It is such a residential area around the hotel.’

Earlier this year, 130 asylum seekers were moved from the Ibis in Bramley to the Holiday Inn hotel in Manvers.

Mr Healey revealed last month the Home Office have extended the exclusive contract with the Manvers site until October next year.

In an open letter to Home Secretary Suella Braverman Mr Healey said he was ‘extremely disappointed’ in the decision, which he said was made without community consultation. 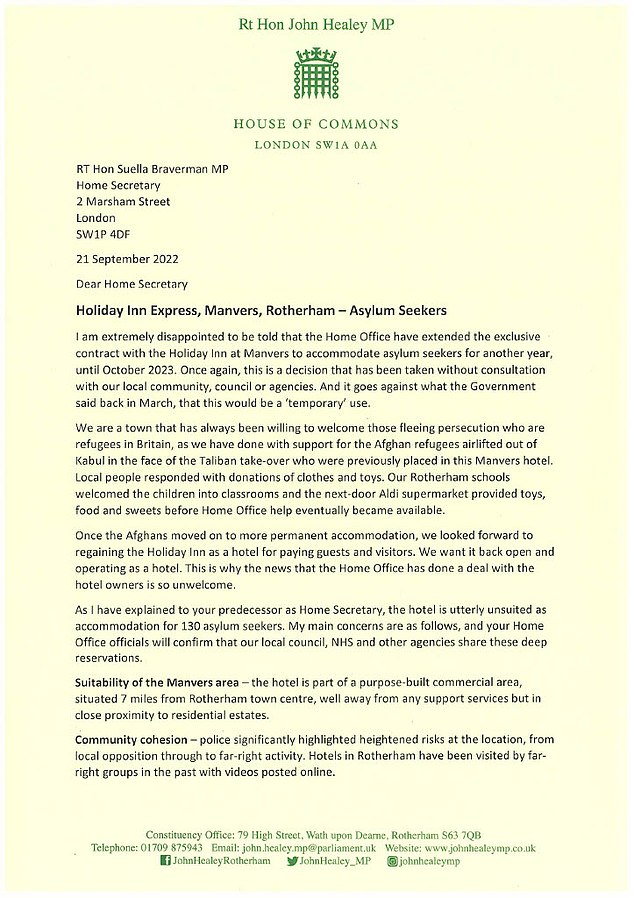 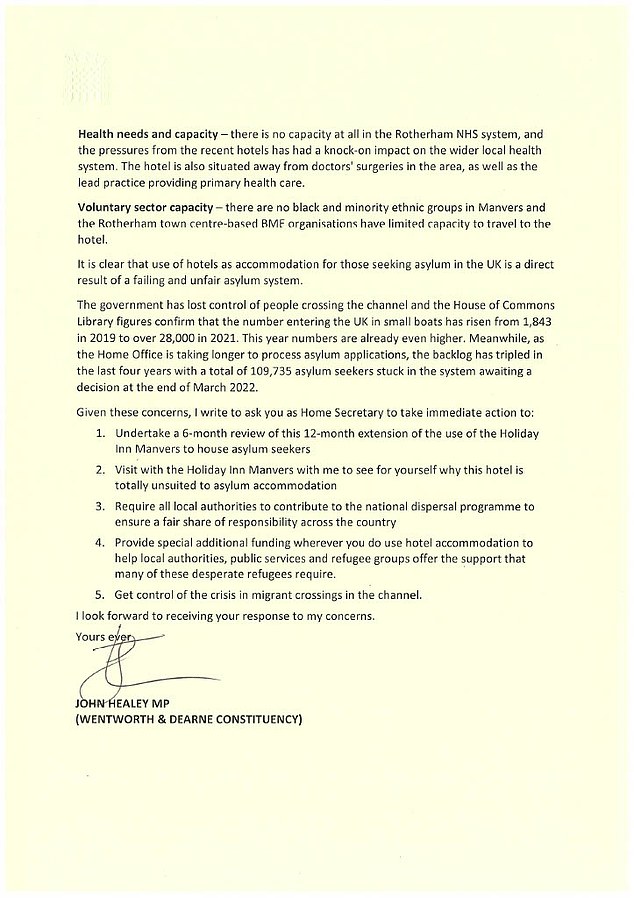 ‘Once again, this is a decision that has been taken without consultation with our local community, council or agencies and it goes against what the Government said back in March, that this would be a ‘temporary’ use,’ said Mr Healey.

‘It is clear that the use of hotels as accommodation for those seeking asylum in the UK is a direct result of a failing and unfair asylum system.

‘There are no black and minority ethnic groups in Manvers and the Rotherham-based BME organisations have limited capacity to travel to the hotel.’

The Home Office said: ‘We engage with local authorities as early as possible whenever sites are used for asylum accommodation and work to ensure arrangements are safe for hotel residents and local people.

‘We continue to work with local authorities to find appropriate accommodation for asylum seekers across the UK and to reduce the use of hotels.’