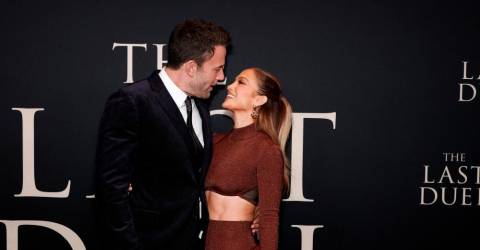 IT may have taken them a while, but Jennifer Lopez and Ben Affleck are ready to get married.

The couple, who were previously dating and who famously called off their previous engagement 17 years ago, are once again heading up to the altar, after rekindling their romance about a year ago.

Lopez shared the news in her On the JLo newsletter days after she was photographed wearing what appeared to be an engagement ring earlier in the week.

She revealed the exciting update in a Friday evening email to her inner circle.

The message to fans included a clip of Lopez admiring a huge, green stone on a silver band on her ring finger, an image of which was also shared by her sister Lynda on social media.

Lopez later teased the “major announcement” with a video on Twitter that same night. “So I have a really exciting and special story to share …” Lopez told her followers. She also added a diamond ring emoji to her Twitter handle.

In a recent interview with People magazine, Lopez explained what makes their connection different now compared to 18 years ago, saying: “We’re older now, we’re smarter, we have more experience, we’re at different places in our lives, we have kids now, and we have to be very conscious of those things.”

“It’s a beautiful outcome that this has happened in this way at this time in our lives where we can really appreciate and celebrate each other and respect each other,“ Lopez told People. “We always did, but we have even more of an appreciation because we know that life can take you in different directions.”

While Affleck himself has yet to comment on the engagement, he has been pictured more frequently with Lopez in recent weeks, last seen cheering her on with his son Samuel and her daughter Emme as Lopez accepted the Icon Award at the iHeartRadio Music Awards in March.