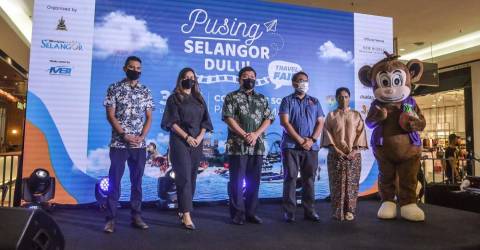 Tourism Selangor recently rolled out promotional initiatives to attract local tourists to travel within the state of Selangor.

At the event, Lee said the travel fair was launched to “reset tourism” and to revitalise the tourism industry in Selangor.

The state had attracted a staggering 30 million tourists in 2019, which had a positive impact on the state’s economy, particularly its tourism industry.

“The Pusing Selangor Dulu Travel Fair is among our many initiatives planned to revamp those numbers in this pandemic era,“ said Lee.

This initiative will see Tourism Selangor embark on a mission to encourage tourists from other states to visit Selangor beginning next year, as part of the promotional initiatives of the Pusing Selangor Dulu Domestic Tourism Campaign.

Lee added that there were 16 booths at the travel fair to promote Selangor-based products and destinations, which were open to the public during the event.

Lee also spoke about another planned Selangor Tourism event – the Tourism Selangor Global Convention 2021 (TSGC 2021), which will take place this Friday and Saturday.

The hybrid event will take place in a physical gathering at New World Petaling Jaya Hotel, where business leaders and influential individuals will share their thoughts on the future of tourism.

Members of the public will also be able to view the conference by registering for free at tsglobalconvention.com, to watch panellists discuss the future direction of the tourism industry in the country.

Among the topics up for discussion are Digital Tourism 4.0 and E-Commerce, Innovation and Diversity in Tourism Business Survival During this Pandemic, Influencers in Tourism Destination, Sports Tourism, Creative Tourism and the Film Industry and C – Level Tourism Dialogue.

Pendants in the shape of Selangor