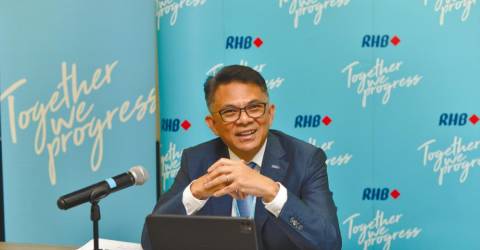 However, group managing director and CEO Mohd Rashid Mohamad (pix) said the bank is at a 3.2% loan growth rate now and it is confident of achieving the 4.5% target it set for the year.

“Our view is that the high inflation and interest rates expected for this year could impact our loan growth but the impact will not be substantial,” he told a virtual press conference after announcing its H1’22 financial results today.

Mohd Rashid stated that its loan growth drivers will still be the mortgage, auto finance, small and medium enterprise (SME), and Singapore segments.

According to RHB’s repayment assistance programme data, 91% of borrowers have resumed their monthly instalment payments; however, it did see an uptrend in gross impaired loans (GIL) among micro SME which it is closely monitoring.

“Yes, maybe an uptick in provisions is possible, but we are quite confident that we would be able to maintain the GIL ratio below 1.7% for the entire year, looking at our asset quality,” he said.

For the second quarter ended June 30, 2022, RHB’s net profit fell 9.5% to RM634.83 million from RM701.34 million a year ago mainly due to lower non-fund-based income and higher operating expenses. Revenue for the quarter was marginally higher at RM2.99 billion compared with RM2.93 billion in last year’s corresponding quarter.

RHB declared an interim dividend of 15 sen per share, consisting of a cash payout of 10 sen per share and an electable portion under the dividend reinvestment plan of five sen per share. This is equivalent to a payout ratio of 51.2%. RHB has a dividend payout ratio policy of 30% of its net profit.

The bank has achieved a cumulative RM11 billion in sustainable financial services as of June 30, 2022.