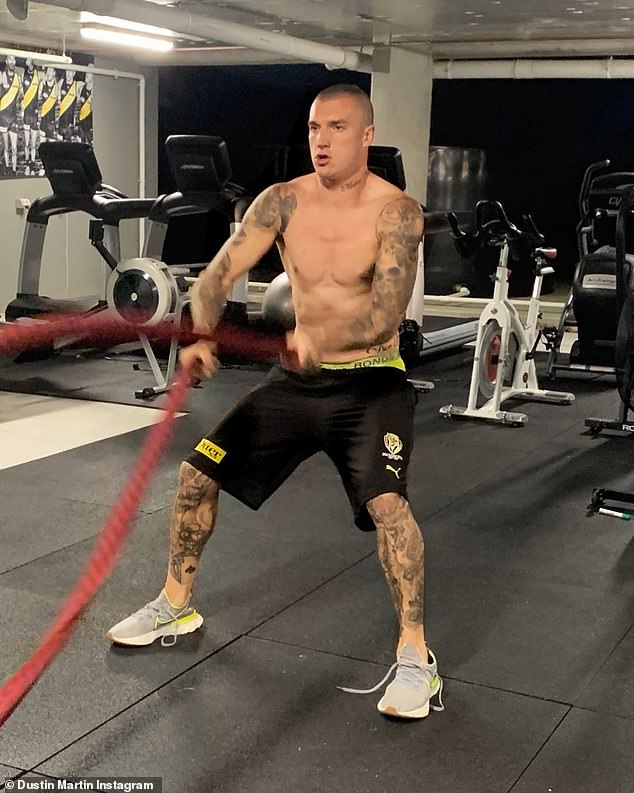 Martin, who is notoriously private when it comes to the media, recently launched a fitness app, DRIP, alongside friends in his incredibly tight inner sanctum.

The 31-year-old superstar has had a tough 12 months during which he tragically lost his father, suffered a serious kidney injury and spent time away from the club for personal reasons – much of which was spent in NSW.

Dustin Martin training in a gym ahead of his return earlier this season after taking personal leave. His 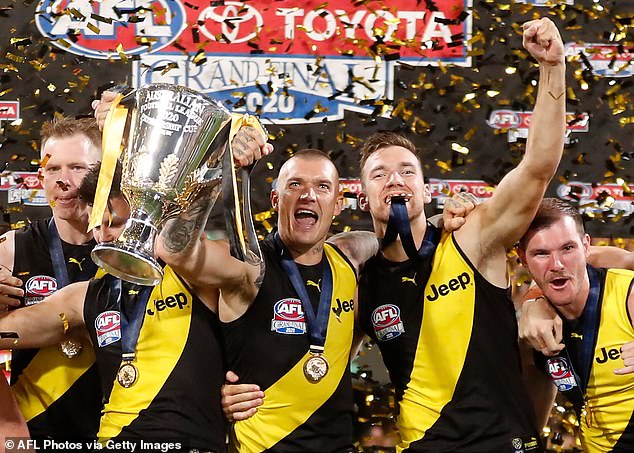 Martin (centre) celebrates winning the 2020 AFL grand final, where he was best on ground

Many pundits and fans believe that is exactly where he will be living next year, with the Swans overwhelming favourites to land him.

‘Sydney keep getting mentioned. He’s had a love of Sydney … so if he wanted to go to Sydney, Sydney would move heaven and earth to make it happen.’ 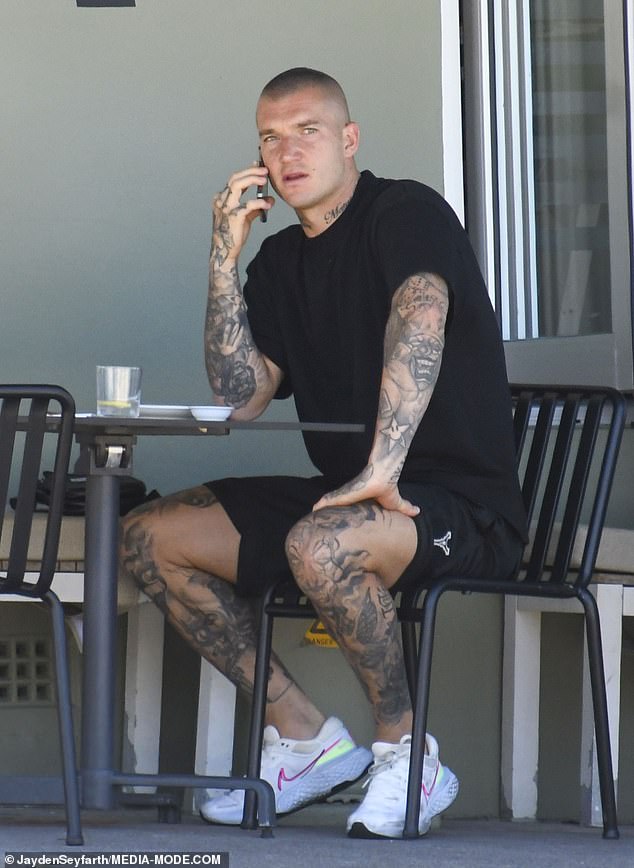 Dustin Martin at a Bondi restaurant in February; he has spent a fair bit of time in Sydney

Veteran reporter Caroline Wilson went a step further, indicating ‘it’s on’; with a peaceful split between club and player a viable option, given the midfielder is due $2.6million over the remaining two years of his contract.

‘It’s (the move to Sydney) certainly something that is being considered,’ she said on Channel 9 show Footy Classified.

‘He started the year with a broken heart, it was a shock loss at the end of last year … and for the first time I think there are people at Richmond looking at life beyond Dustin Martin.’ 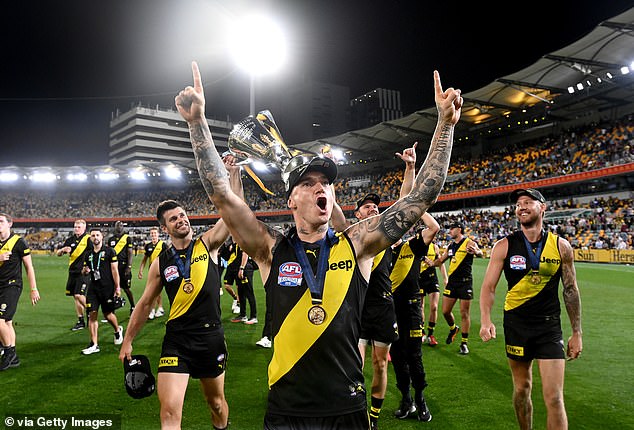 Tigers coach Damien Hardwick said given all the midfielder has achieved at the club, he deserved the chance be in his chosen place on and off the field.

‘Whatever Dustin’s decision is moving forward is up to Dustin and, to be honest, he has my blessing. What he’s given me, us, our fans has been incredible,’ he said at a recent press conference. 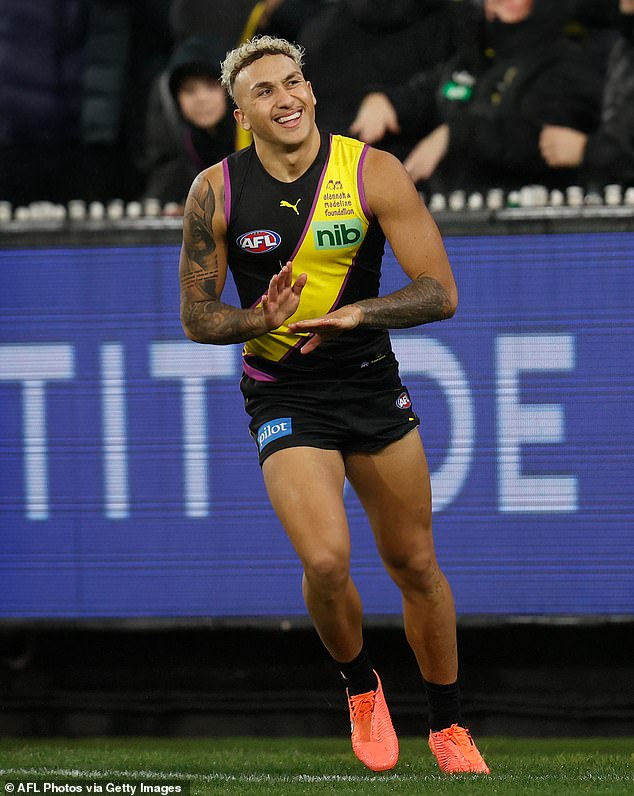 Off the field, Martin has a very tight inner circle – but they’ve rallied around him to launch DRIP.

The app features a ‘Team Dusty’ stable of trainers include: 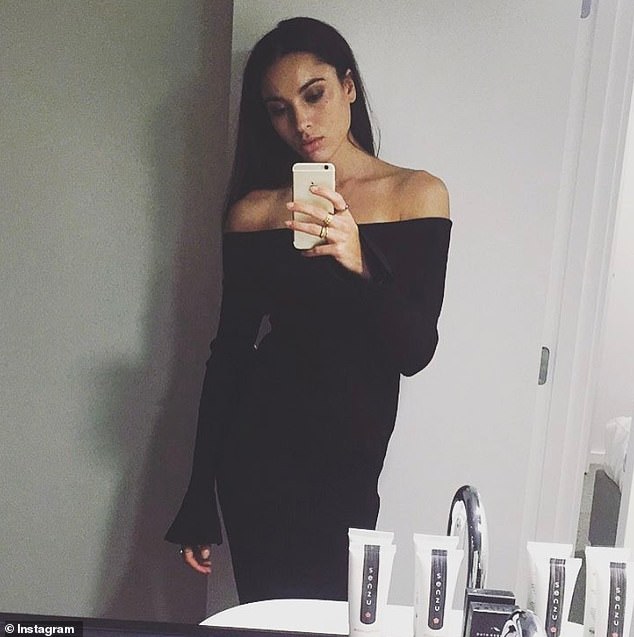 Farrah-Seaton, a prominent influencer with more than 76,000 Instagram followers, will need no introduction to many; she was runner-up at the 2018 Miss Globe pageant and is a common sight on runways and at fashion shoots.

Nabbout has represented the Socceroos on 10 occasions thus far, while Hislop, a strength specialist, was a teammate of Martin’s for two years at Richmond. 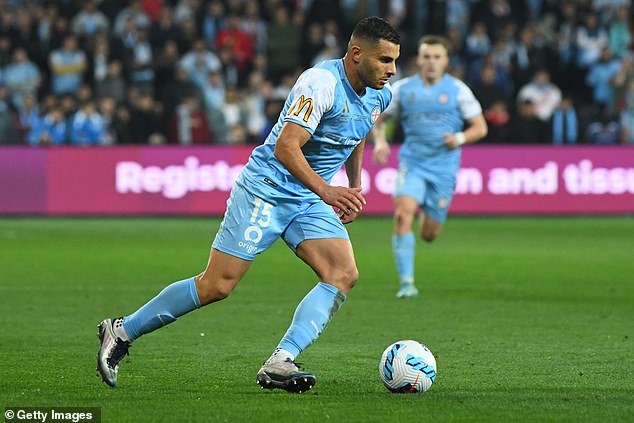 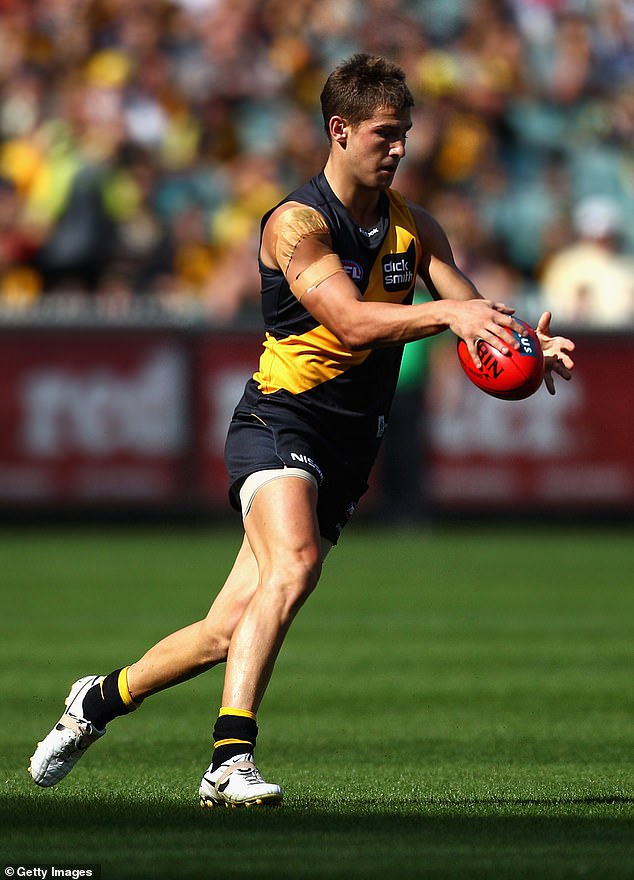 Former Tigers player Tom Hislop, who was a teammate of Martin’s for two years

Murray has worked with Martin for many years, helping him with his mindset, and she said earlier this year he was ‘the most giving person and loyal person’ and ‘one of the most engaged athletes she had worked with’.

If Sydney can pair him up with Lance Franklin in 2023, look out. That mindset might be even more dangerous for hapless opponents.