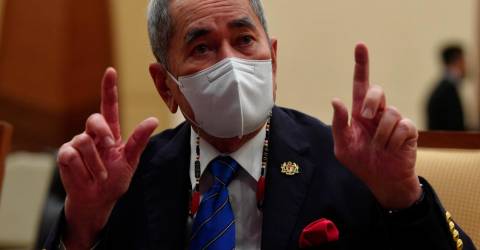 KUALA LUMPUR: The freedom of information and the right to access accurate information is vital, particularly in a democratic country like Malaysia, said Minister in the Prime Minister’s Department (Parliament and Law) Datuk Seri Dr Wan Junaidi Tuanku Jaafar (pix).

Wan Junaidi said this will inevitably ensure that people can obtain accurate and current information consequently reducing the spread of fake or false information and news.

“My Ministry has been working closely with the Centre for Independent Journalism to explore the possibility of a Right to Information legislation in Malaysia.

“I was informed that engagement sessions have been conducted at both federal and state levels to ensure the policy decision is well-founded and can be presented to the government for a decision soon,“ he said in his closing remarks at 2022 World Press Freedom Day Virtual Forum entitled Journalism Under Digital Siege, here today.

Wan Junaidi added he supports the initiative and will facilitate a policy decision in due course, adding that as a democratic country there must be checks and balances on the government, and the media plays an important role in this.

He said the press can act as a bridge between the government and the people, as the role of media is important as a feedback, exposure and conduit mechanism.

“Most citizens receive their information about what is going on in the government, and how it affects them, through the media. In order to push the boundaries of media freedom, all media practitioners must be truthful in their reporting and reported news in the best possible manner,” he said.

Meanwhile, Wan Junaidi said media practitioners need to adapt to changes due to the demands of the internet revolution in the era of digitalisation to meet the consumer’s habits of getting the latest news, real-time news, mostly uploaded 24 hours online.

“As such, media practitioners need to adapt to these changes (consumers habits) and find ways to tackle the onslaught of digital siege.

“Whilst I am intrigued and support the development in the media fraternity, I am also perplexed at how the freedom of speech is “arguably” used to spread inaccurate and sometimes false information.

“I am glad that in today’s age “internet citizens” or better known as netizens and the new generation of influencers are given the opportunity to exercise their freedom of speech and freedom of expression. However, I also believe that these freedoms should be exercised responsibly by all quarters,“ he said. — Bernama