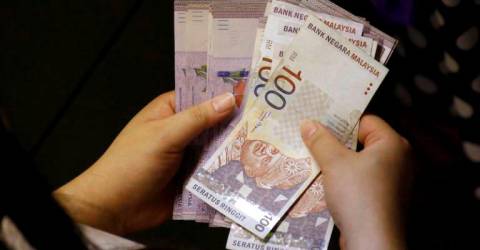 KUALA LUMPUR: The ringgit ended at its lowest since March 2020 on the US dollar’s strength amid fresh recession worries after the world’s largest economy reported inflation hitting a 40-year high in June.

US consumer prices surged by 9.1 per cent, a significant increase from 8.6 per cent in May, with the market now predicting a 100-basis points (bps) hike in interest rate this month from 75 bps previously.

SPI Asset Management managing partner Stephen Innes said the inflation print was a shocker and other central banks are answering the call with Bangko Sentral ng Pilipinas (BSP) and the Monetary of Singapore (MAS) tightening policy to fend off inflation.

The Monetary Board today raised the key policy rate of the BSP by 75 bps to 3.25 per cent effective immediately, while MAS has boosted its support for the Singapore dollar in an off-cycle policy decision in a move to curb inflation.

MAS said it will re-centre the mid-point of its Singapore dollar nominal effective exchange rate policy band up to its prevailing level.

‘’I think the US Federal Reserve needs to front load rate hikes even if it triggers a mini recession.

‘’If inflation becomes entrenched in the economy, they may need to tighten longer and that means slower growth,’’ he told Bernama, adding the US dollar risk premium as a safe-haven asset will weigh on the global currency market, including the ringgit.

The local unit was traded mostly lower against a basket of major currencies.