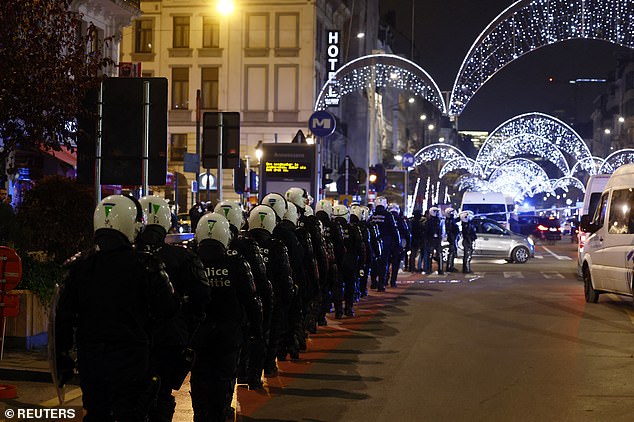 By James Callery For Mailonline

Riot police were deployed in Brussels for the match between Belgium and Croatia on Thursday following riots at the weekend after the nation’s shock 2-0 defeat to Morocco.

Belgium tumbled out of the group after a 0-0 draw in a game that kicked off at 3pm GMT.

Morocco also beat Canada in a match that ended 2-1, played at the same time.

The frustration of the night was summed up by Belgian striker Romelu Lukaku, who punched the plexiglass window of the dugout after the final whistle.

Pictured: Police officers in riot gear walk in a line in Brussels after the Canada vs Morocco match 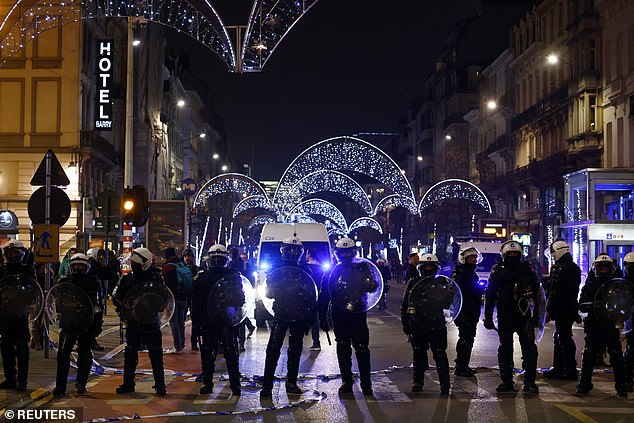 Pictured: Police officers stand guard in Brussels after the game against Morocco

Ilse Van de keere, spokesperson for Brussels police told Belgian newspaper Le Soir ahead of the game: ‘We will be very vigilant and we will be visible from the start of the match with more police officers on the ground.’

Images released this evening by the AP news agency show police anti-riot vehicles taking position in downtown Brussels prior to the start of the match.

In one image, the vehicles block the entrance of a Christmas market. 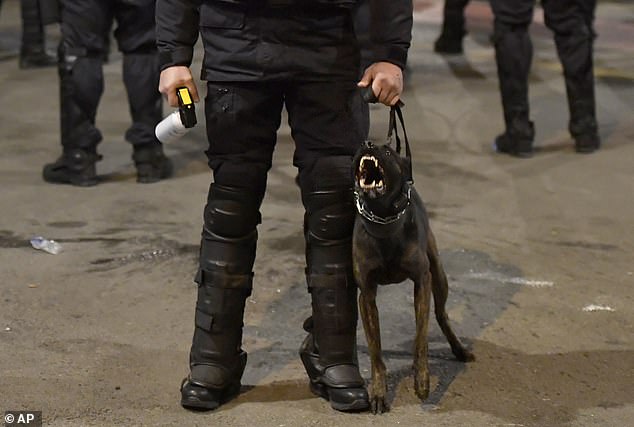 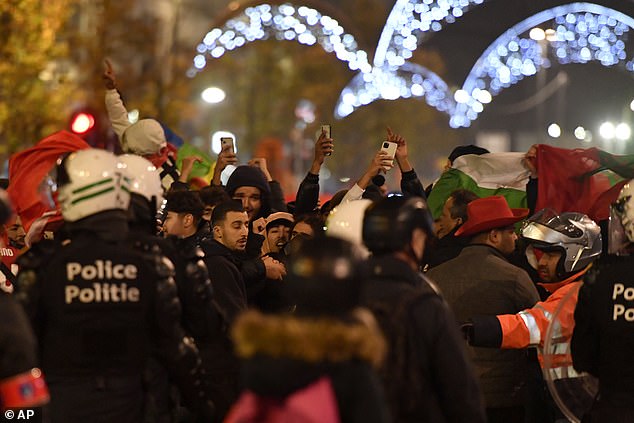 Pictured: Police riot officers amongst a crowd of Morocco fans celebrating after the game on December 1

In another photograph posted by Reuters news agency police in riot gear stand in front of Morocco fans after the match against Canada.

In another scene the revellers climb on top of a city bus and dance around a car.

It added that police closed parts of Turnhoutsebaan in Borgerhout, and Sint-Bernardsesteenweg in Hoboken, after people celebrating Morocco’s victory against Canada took to the streets, some of them with fireworks. 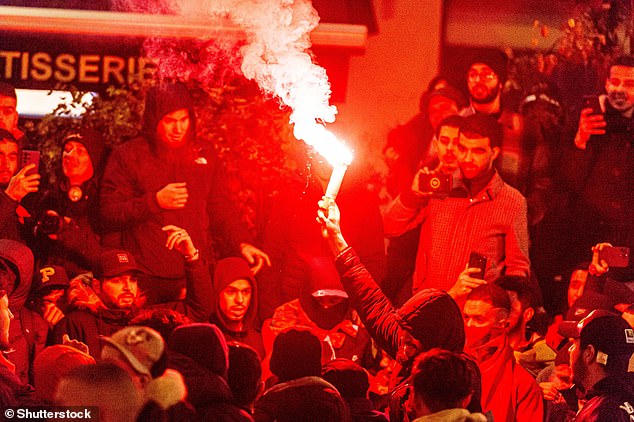 Pictured: A Moroccan supporter lights a flare in the street after the match 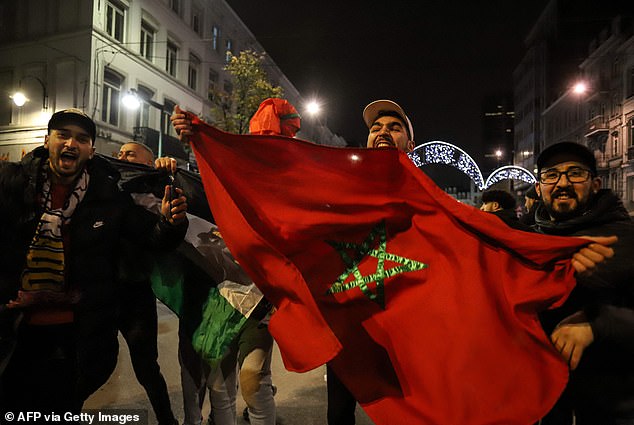 Pictured: Supporters hold Morocco’s national flag as they make their way through the city

Belgian police detained a dozen people and made one arrest on Sunday after the riots in Brussels.

The unrest took place in several parts of the Belgian capital, where scores of football fans, some draped in Moroccan flags, clashed with riot police who used water cannons and tear gas against them. 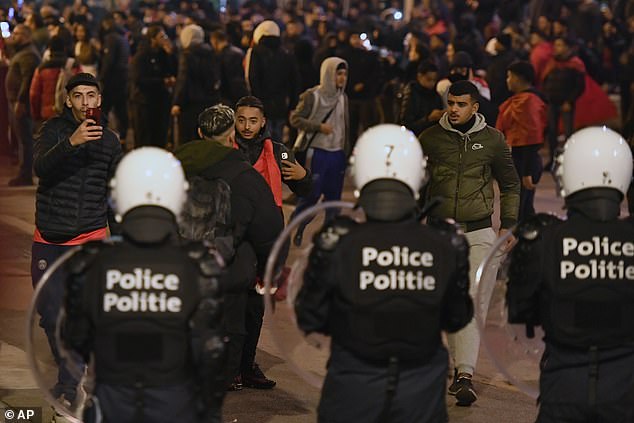 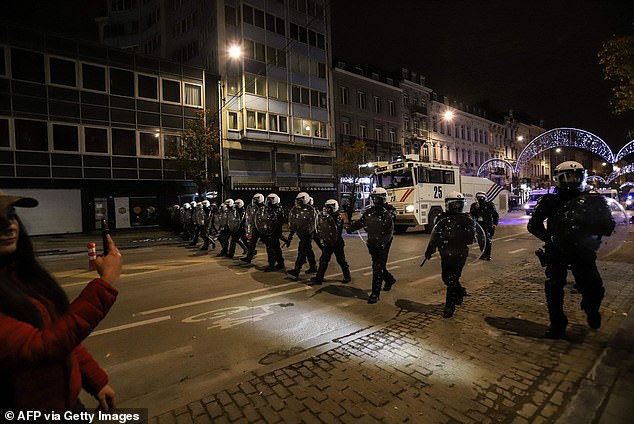 Pictured:  Morocco fans film the police presence in the city on Thursday

‘Also, a journalist was injured in the face by fireworks. It is for these reasons that it was decided to proceed with a police intervention, with the deployment of water cannon and the use of tear gas,’ the police said. 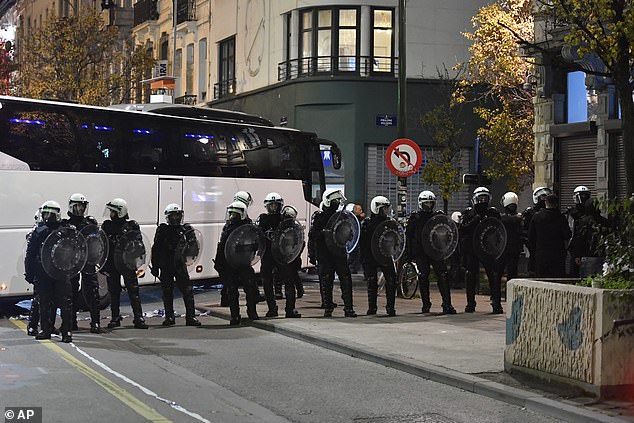 Ilse Van de keere, spokesperson for Brussels police told Belgian newspaper Le Soir ahead of the game, which kicked off at 3pm GMT: ‘We will be very vigilant and we will be visible from the start of the match with more police officers on the ground.’

Brussels mayor Philippe Close said on Sunday: ‘I strongly condemn the incidents that occurred this afternoon. The police have already acted harshly.

‘So I advise supporters not to come to the centre.

‘The police are doing everything they can to maintain public order.’