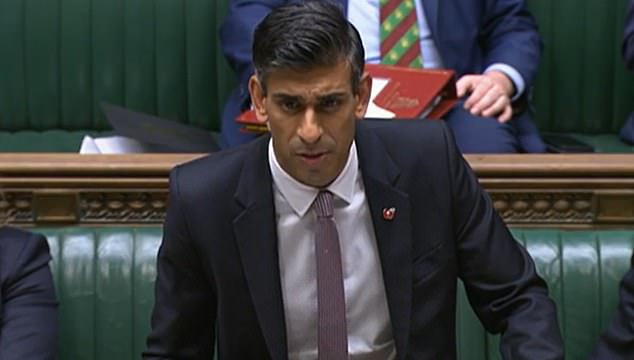 Rishi Sunak told MPs today the payment of trillions of pounds in ‘reparations’ to climate-hit countries was ‘not the right approach’.

The Prime Minister, who attended the Cop-27 climate summit in Egypt on Monday, insisted that talks over ‘loss and damage’ at the Sharm El-Sheikh conference was ‘not the same as reparations’.

Speaking in the House of Commons, Mr Sunak stressed the prospect of rich nations stumping up for climate change ‘reparations’ was not ‘on the table’ at the Red Sea gathering.

He instead suggested that UK cash would be used to help developing countries ‘transition to a cleaner future’ in a way that could also boost British businesses.

The topic of ‘loss and damage’ has been included on the Cop agenda for the first time this year.

It is the idea that worst-affected nations are given money to pay for costs already being incurred from climate-fuelled weather extremes or impacts, like rising sea levels.

There are calls for richer nations to acknowledge their role in climate change due to the fact they industrialised their economies before other parts of the world.

But it is proving contentious with a growing backlash at the prospect of UK taxpayers’ cash being used to fund what some campaigners have branded as ‘reparations’.

They claim that Britain and other wealthy nations must pay up for the climate damage they have already caused over the past 250 years of industrialisation. 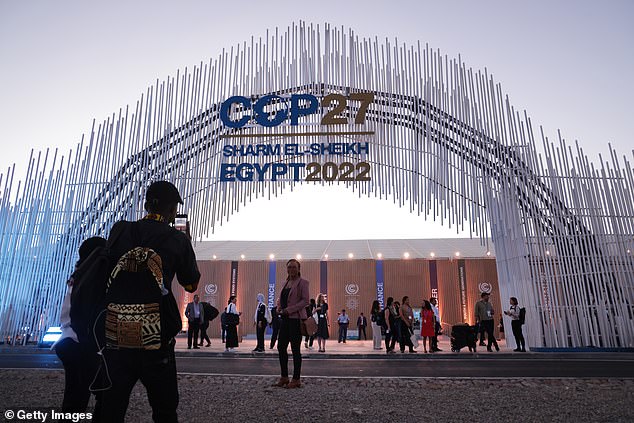 The topic of ‘loss and damage’ has been included on the Cop agenda for the first time this year during the conference being held in Sharm El-Sheikh, Egypt 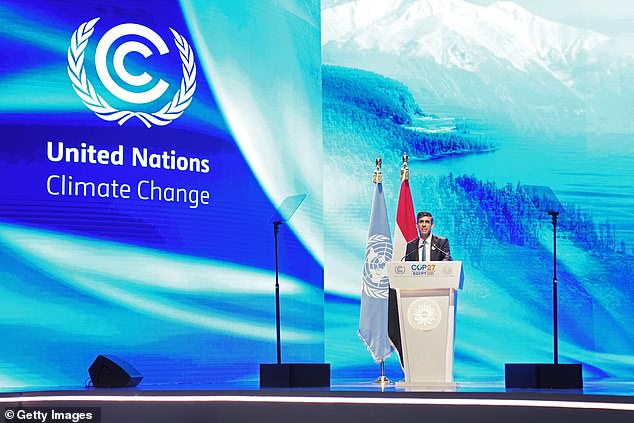 The PM spoke at the Cop-27 conference on Monday. He denied the summit’s discussions over ‘loss and damage’ would be the equivalent to ‘reparations’ for past carbon emissions

Mr Sunak said he was ‘pleased’ the UK had established a ‘dialogue’ on ‘loss and damage’ at last year’s Cop-26 summit in Glasgow.

He told MPs the ongoing talks would ‘discuss arrangements for funding activities to avert, minimise and address loss and damage’.

But the PM later denied that talks over ‘loss and damage’ would be the equivalent to ‘reparations’ for past carbon emissions.

Senior Tory MP Theresa Villiers, a former environment secretary, asked Mr Sunak whether he shared her concerns about ‘the idea of spending trillions more pounds on so-called reparations payments… at a time when the public finances are already under strain?’

‘She is absolutely right, that is not the right approach,’ the PM replied.

‘What we are doing is fulfilling our obligations to help those emerging markets transition to a cleaner future.

‘We’re doing that in a way that supports them but also supports British companies who are able to provide those investments and create jobs here at home as well.’

The PM was also quizzed on the issue by Green MP Caroline Lucas, who urged Mr Sunak to ‘recognise that the moral obligation he talks about must now extend beyond mitigation and adaptation to address loss and damage’.

She called on the PM to ‘support the establisment of a finance facility for loss and damage at Cop-27’.

Mr Sunak replied: ‘I’ve already made the point on loss and damage that we established the Glasgow dialogue to see how best to take forward those discussions.

‘I’m not going to pre-empt the discussions that are happening at Cop.

‘But I would make the point this is not the same as reparations.

‘I think she understands that, but that is not what’s on the table and that is clear in the language that is being debated at Cop.’

Austria also joined Scotland in pledging ‘loss and damage’ money at the Egypt conference, with a commitment of at least 50 million euros over the next four years.

Belgium, Denmark and Germany have also pledged small amounts of funding for ‘loss and damage’.

‘There is no need to pay reparations,’ he said, adding that Britain’s ‘leadership of the industrial revolution brought prosperity to the world and led to increased life expectancy and better living conditions’.