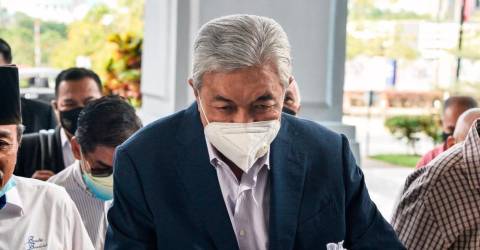 Ahmad Zahid, 69, said that the donation was not for his personal benefit.

“Your Honour, the donation was not for me personally, it was for charity. I don’t feel anything and that’s normal,” said the member of Parliament for Bagan Datuk when cross-examined by deputy public prosecutor (DPP), Mohd ‘Afif Ali, while defending himself on 47 charges, namely 12 criminal breaches of trust, eight corruption and 27 money laundering charges, involving tens of millions of ringgit belonging to YAB funds.

However, he said that he did not question the source of the donation.

When asked by Mohd ‘Afif about the textile wholesaler Junaith had asked him to get a tax exemption, Ahmad Zahid said that he did not remember.

Mohd ‘Afif: Throughout the trial of this case there was no document showing that the tax exemption, or even information related to Junaith’s contribution to YAB, was ever presented in court.

Mohd’ Afif: I suggest that Junaith once asked Datuk Seri that he asked for a receipt to get a tax exemption.

Touching on YAB funds amounting to RM1.3 million given to the Royal Malaysia Police (PDRM) Football Association in 2015, Ahmad Zahid said that the funds were in the form of loans and not sponsorships.

He said the funds were requested by his son-in-law, Datuk Zul Hisham Zainal, who is also a businessman, as financial assistance to the players and staff of the football association who had not been paid for four months.

Ahmad Zahid agreed with DPP Nur Aishah Ahmad Zakiuddin’s suggestion that he was the one who instructed his former executive secretary, Major Mazlina Mazlan @ Ramly, to provide the RM1.3 million cheque to the football association, and had signed the cheque.

Asked by Nur Aishah whether YAB, which is meant for charity, can provide funds to the football association, Ahmad Zahid explained that if they did not receive their salary for four months, they would become poor because they were unable to cover their daily expenses, house and car instalments.

Ahmad Zahid also denied that the RM1.3 million given to the football association was a criminal breach of trust because the money had been paid back to YAB.

Meanwhile, Ahmad Zahid disagreed with the prosecution’s suggestion that he often blamed others while testifying in court.

“I’m not blaming others, it’s the truth and that’s what really happened. My statement is based on the oath I read (in court),“ he said.

Ahmad Zahid’s defence team previously informed the court that it would call 20 witnesses.

On Jan 24, the court ordered Ahmad Zahid to enter his defence on the 47 charges.