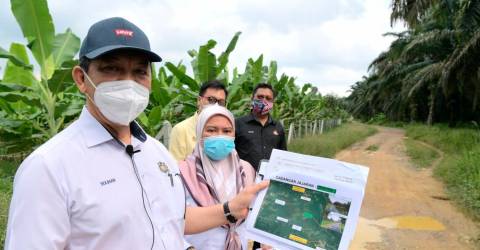 SEGAMAT: The RM199 million new road project to connect Paloh town in Kluang with Bekok town, here, will begin in the second quarter of next year.

“The project connecting the two districts is now at the designing stage and is expected to start in the middle of next year after the tender offer. This new dual carriageway is expected to be ready in three years.

“With this high-impact project, the distance and travel time between Segamat and Kluang districts will be shortened,” he told reporters after visiting the project site in Bekok today.

“Currently, the residents from both locations have to travel a rather long distance via Batu Pahat and Yong Peng,“ he said, adding that this new road project would be a catalyst for development of the surrounding areas where the residents were mostly engaged in agriculture activities.

He said this development would also boost tourism in Bekok, known for its Sungai Bantang Eco Forest Park, hence will be able to generate economic activities for residents living along the route between Paloh and Bekok.

“As Segamat will be included in the agriculture sector under the East Coast Economic Region (ECER) development programme, I feel that this project will help in the area’s development.

“What more, the new road project is only about 500 metres away from Bekok town while a railway station is being built, which will not only improve accessibility for the local and outside residents but also tourists,” he added. — Bernama