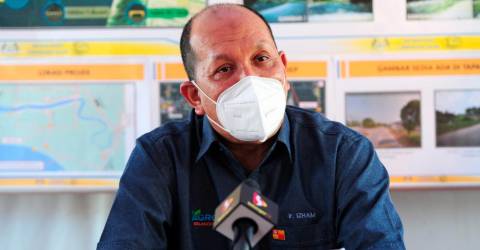 SABAK BERNAM: A 2.04-kilometre (km) bridge spanning across Sungai Bernam, with an allocation of RM220 million, to link Sungai Air Tawar, Selangor and Pekan Hutan Melintang, Perak will be built from January 2022 and is expected to be completed in May 2025.

Selangor Infrastructure and Agriculture Committee chairman Ir Izham Hashim(pix) said the project would create a road network connecting Selangor and Perak and the quotation would be issued from January 2022.

“The project is based on requests from residents and will shorten travel from 40 minutes to 10 minutes using normal routes and will be a catalyst for local economic growth,” he told reporters after visiting the suggested construction site of the second Sungai Air Tawar bridge, which is a part of the 12th Malaysia Plan (12MP) here today.

Izham said the project was a rural federal road project, which includes the construction of a 3.2km road, including the 2.04km bridge and the installation of street lamps at intersections, the bridge and drainage system and road fittings.

Izham said the Selangor government will also implement three projects worth RM72 million, with one of them being the completed upgrade of a 2km road to the Sabak Bernam Intergrated Boarding School.

The two remaining projects is a 200m bridge upgrade at Pekan Sg Besar that is still in planning stage and a 3.5km road upgrade of Jalan Sg Panjang from the intersection of the Federal Road to Parit Empat Timur, Sg Besar, which is in the design phase.-Bernama