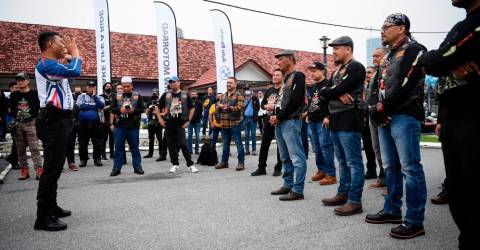 KUALA LUMPUR: Having dealt with a scammer, who tried to dupe him through a phone call, prompted the country’s rock legend, Datuk Awie, to launch an anti-scam awareness campaign tour throughout the Peninsula, starting today.

Awie, whose real name is Ahmad Azhar Othman, said the tour, which received support from the Royal Malaysia Police (PDRM), aims to provide information and increase the understanding of the community, especially in rural areas, about the risk of being cheated by scammers.

He said the campaign was to explain to the community how dangerous these scammers are, who have stolen the money of village folks, especially the elderly.

“We will give exposure on do’s and don’ts. Some of them do not realise the individual on the phone is trying to dupe them. Hence, we bring experts to explain in detail about their modus operandi,” he said when met at the flag-off of the participants in the Commercial Crime Prevention Campaign @ Awie Ride convoy, at the Police Training Centre here, today.

In his speech, Mustafa Khan said that initiatives such as the tour series could be used as a medium that would benefit the community, especially in imparting knowledge on the latest criminals’ modus operandi and trends.

The convoy participants will make several stops in every state to begin the commercial crime prevention programmes, including delivering danger awareness talks and scammer prevention by Awie himself. – Bernama