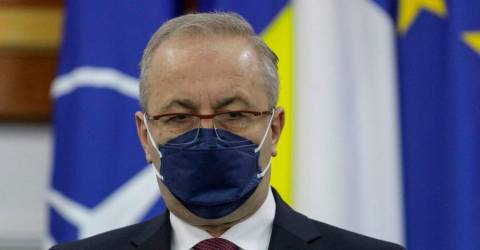 BUCHAREST: Romania’s defence minister said Monday he would resign, after he faced a wave of criticism for saying the war in Ukraine could only end through peace talks with Russia.

Vasile Dincu announced the move on social media, citing the “impossibility of collaborating with the president” as the reason for his resignation.

Romania’s President Klaus Iohannis publicly condemned Dincu over his Ukraine comments earlier this month, saying “only Ukraine can decide when and what it negotiates”.

“This is our official position and certain dignitaries of our country should read the media more often to find out about it”, he told reporters.

The comments came days after Dincu, a sociologist by trade, said in a televised interview “the only chance for peace could be negotiating with Russia”.

“The world’s countries, NATO, US” would have to “negotiate security guarantees for Ukraine and peace with Russia”, he said in the October 8 broadcast.

Dincu was also criticised by the leader of his social democratic party (PSD) and was summoned by Prime Minister Nicolae Ciuca last week, as the opposition called for his resignation.

“My withdrawal is necessary in order to not block the decision-making process… and a series of projects absolutely necessary for the optimal functioning of the Romanian army”, Dincu said in his resignation Monday.

Romania, a NATO and EU member who shares a long border with Ukraine, has called Russia’s invasion “a brutal, unprovoked and unjustified war”.

It also agreed to host more allied troops and equipment since the war started to reinforce NATO’s eastern flank.

On Sunday night the first convoy of light and heavy French armoured infantry vehicles crossed the border into Romania as part of Paris’ pledge to boost NATO’s presence.

A squadron of French Leclerc tanks is expected to arrive in Romania in November. – AFP