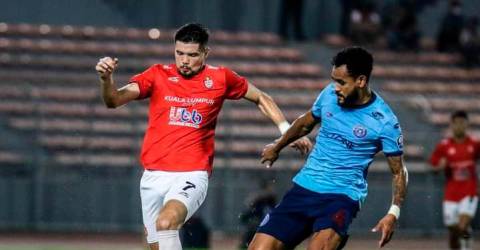 Sabah FC were nearly ahead in the 14th but the powerful shot by captain, Baddrol Bakhtiar was blocked by KL City goalkeeper, Kevin Ray Mendoza before Romel brought cheers to the hosts by heading in a free kick for his first goal this season, taken by Paolo Josue in the 36th minute and score remained until the end of the first half.

In resuming the second half, the visitors stepped up the tempo and almost found the equaliser when a header by Baddrol missed the the left of the goal in the 54th minute.

While the Rhinos continued to be frustrated by their fruitless attempts, especially by Kevin, in two close calls by Sabah’s import striker Taiki Kagayama followed by substitute, Nazirul Naim Che Hashim, in the 67th minute.

Romel proved to be a real menace to the squad under former national head coach, Datuk Ong Kim Swee, when he easily slotted his second goal two minutes before the end of the match to help Bojan Hodak’s boys recorded their second league win in five matches this season.

Defender, Herold Mark Goulon opened the score for the hosts via a penalty at the end of the first half before a header by Darren Lok in the 63rd minute equalised for the visitors.

Stung by the goal, Negeri Sembilan went all out and was rewarded by a goal by substitute striker, Sean Eugene Selvaraj in the 80th minute while Matheus Alves Leandro completed the beating for K.Devan’s squad five minutes later.

In this regard, Sri Pahang FC failed to benefit from home ground advantage to lose 1-2 to Melaka United FC at Darul Makmur Stadium, Kuantan.

The Elephants led the match through a penalty converted by their Jordanian striker, Mahmoud Saleem Mahmoud Za’tara in the fifth minute but Melaka United bounced back to equalise via Emmanuel Oti Essigba in the 51st minute before Hasbullah Abu Bakar netted in the 70th minute to give Melaka their first win this season.