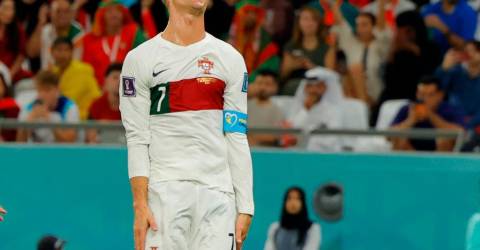 DOHA: Cristiano Ronaldo was “insulted” by a South Korean player as he was substituted during Portugal’s 2-1 World Cup defeat on Friday, coach Fernando Santos said.

The 37-year-old skipper looked miffed and ambled off slowly when his number went up in the 65th minute.

Santos denied that was because he was upset at being hooked.

“He was angry with the player from Korea and everyone saw that,“ Santos said after his side topped Group H despite conceding in injury time to fall to defeat for the first time in Qatar.

“The player was insulting him, telling him to go away (get off the pitch) so that’s why he was angry and everyone saw that.

“I saw the interaction with the Korean player and have no doubt about it.”

Becoming irritated by the line of questioning, Santos added: “He (the Korean player) was not aggressive, he was verbally aggressive.

“He was speaking in English to Cristiano and Cristiano said, ‘Well, perhaps he did not have a good day.’”