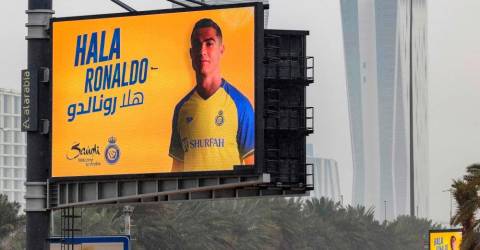 RIYADH: Portuguese superstar Cristiano Ronaldo (pix) will be greeted by thousands of adoring fans in Riyadh on Tuesday after quitting top-level football for a lucrative spell at Saudi Arabia’s Al Nassr.

The 37-year-old, who won the Ballon d’Or five times and whose great rivalry with Lionel Messi dominated world football for well over a decade, will be paraded at his new club’s Mrsool Park stadium after jetting in with his entourage late on Monday.

Ronaldo signed his estimated 200 million euros deal to June 2025 just weeks after his departure from Manchester United, following a TV interview where he slammed the club and coach Erik ten Hag.

Oil-rich monarchy Saudi Arabia, which has been snapping up sports assets as part of a drive to soften its austere image, is often accused of “sportswashing”, or using sport to distract attention from human rights controversies.

“See you soon, Nassr fans,“ Ronaldo said on the plane, in a video posted on Al Nassr’s Instagram account.

Ronaldo arrives just weeks after the World Cup in neighbouring Qatar, and as Saudi Arabia considers a joint Asia-Africa-Europe bid to host football’s biggest tournament with Egypt and Greece.

Thousands of fans are expected to pack the 25,000-capacity Mrsool Park after the club received more than 130,000 requests for tickets for the unveiling, priced at 15 riyals ($4) with revenues going to charity.

Police cars and checkpoints guarded the airport when Ronaldo arrived in the late evening before being taken to a five-star hotel in the city centre.

“He brought a big team of assistants and even a private security firm,“ said a club official who asked to remain anonymous.

Excitement is high over the arrival of Ronaldo, the most high-profile player to come to Saudi Arabia, the Gulf or any country in the Asian confederation.

Fans queued down the street to buy Ronaldo’s Al Nassr shirt, with his trademark number seven, and Al Nassr’s Instagram page gained millions of new followers after his signing was made public.

“Asia has never seen anything like this,“ said a column in United Arab Emirates newspaper Gulf News.

“Wherever he goes, he is guaranteed attention and if just 10 percent of his followers take an interest in his latest move the Saudi Pro League will become one of the most watched in world football,“ it added.

It comes against the backdrop of a Saudi push into sports including golf, boxing, tennis and F1 as well as football, following the takeover of English Premier League club Newcastle United last year.

Hosting the Olympics is an “ultimate goal”, its sports minister told AFP in August, while Saudi is also mulling its joint bid for the 2030 World Cup, officials have said.-AFP