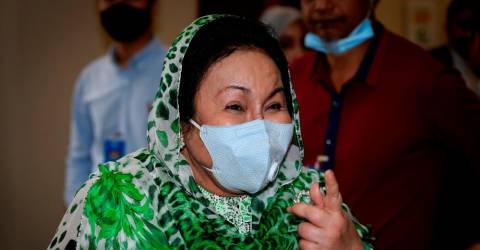 Judge Datuk Ahmad Kamal Md Shahid ruled that the application for leave for judicial review made under Order 53 rule 3(6) of the Rules of Court 2012 challenging Sri Ram’s fiat must be filed within three months from the date when the grounds of application first rose or when the decision was first communicated to the applicant (Rosmah).

“In the present application, the charge was preferred against the applicant on Nov 15, 2018, whereby Sri Ram appeared as the senior DPP in the case. On April 8, 2021, a copy of first fiat was communicated.

The judge added that there was no material or cogent reason or single good reason provided by the applicant for the court to exercise its discretion to grant extension of time in filing this application for leave under Order 53 rule 3 (7) of the Rules of Court 2012.

“Therefore, the preliminary objections raised by the Attorney-General Chambers and Sri Ram as respondents should be allowed. It was not necessary to deal with the merits of the application.

Rosmah, 70, filed the judicial review application on June 24 in the High Court (Appeal and Special Powers) naming the Attorney General/Public Prosecutor, government of Malaysia and Sri Ram as respondents.

In her latest application, Rosmah sought a declaration that the appointment of Sri Ram as senior DPP through three letters of appointment (fiat), dated July 8, 2020, May 11 and May 21, 2021, respectively, was unlawful.

In addition, Rosmah sought a declaration that the entire prosecution proceedings and full trial for the solar case which took place since Nov 15, 2018 until the defence closed the case were invalid and void and she must be acquitted of all charges under Section 16 (a) (A) of the Malaysian Anti-Corruption Commission Act 2009.

The trial at the High Court has been completed and Judge Mohamed Zaini Mazlan has set Sept 1 to deliver the court’s ruling on whether to acquit or convict Rosmah on the three corruption charges.-Bernama