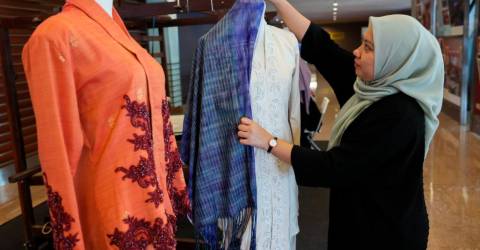 He said in line with current demands, the Pekan-based company also focuses on modern contemporary patterns involving horizontal and vertical lines as well as checkered patterns.

“Pahang weave also utilises soft colours, which is what it is known for, compared to songket which tends to use dark colours,” he told Bernama when met at the Sultan Ahmad Shah International Convention Centre (SASICC) here today.

He said cloth with a basic weave pattern only takes about three weeks to complete but the one with a floral pattern will need more than a month to finish.

Muhammad Adib said the company, which has been operating since 2003, also produced various Royal Pahang Weave patterns on textiles, shirts, samping, and shawls.

The Ministry of Defence is the lead ministry for the three-day Pahang AKM Tour which is being held at SASICC and also at the Darul Makmur Stadium.-Bernama