By Colin Fernandez Environmental Correspondent For The Daily Mail

The Royal Society for the Protection of Birds has thrown its weight behind the Daily Mail’s Be A Tree Angel campaign.

Organised with the Tree Council, the scheme is aimed at getting readers to plant – or pledge to plant – thousands more trees to make a greener Britain and help fight air pollution and climate change.

The campaign is ‘something everyone can get involved in’, the RSPB’s chief executive said.

Since the Christmas appeal began just over two weeks ago, more than 35,000 trees have been planted or pledged. The Campaign to Protect Rural England, Friends of the Earth, the National Trust, Trees for Cities and TCV, a conservation volunteers charity, have all backed the campaign.

Beccy Speight, chief executive of the RSPB and former head of the Woodland Trust, said each tree – especially a native species – was ‘a miniature city’ providing food and shelter for birds, insects and other animals. (Pictured is a file photo of a blue tit in a tree)

The Mail has given away more than 10,000 saplings, including oak, birch, conifers, willow, hazel and holly. Political parties of all shades are backing a major expansion of tree planting which is needed to reduce the amount of greenhouse gases in the atmosphere.

Companies including Eurostar and Easyjet have pledged to plant trees to help offset the environmental impact of travel.

Trees are all too often chainsawed to reduce maintenance costs, with 100,000 felled in towns and parks every three years. One of the big losers when trees are hacked down is wildlife – particularly birds, and the bugs that birds feed on.

Beccy Speight, chief executive of the RSPB and former head of the Woodland Trust, said: ‘In our hectic world we think of trees as unshakable and timeless. It is easy to imagine that a magnificent mature tree has been seen and enjoyed by our grandparents and will be there offering shade to our grandchildren.

‘They are like time capsules, each large tree we see has been cared for by someone from another time. Places like Sherwood Forest are both amazing and inspiring.

‘While much of the political debate has been about expanding existing rural woodlands we should not lose sight of the importance of having trees in our towns and cities acting as green beacons for the wildlife we all want to see as part of our daily lives.’

Miss Speight said each tree – especially a native species – was ‘a miniature city’ providing food and shelter for birds, insects and other animals.

She added: ‘In the branches and beneath the bark each tree is providing a vital service in being a home to wildlife as well as supporting us through cooling, catching rainfall and cleaning the air we breathe. 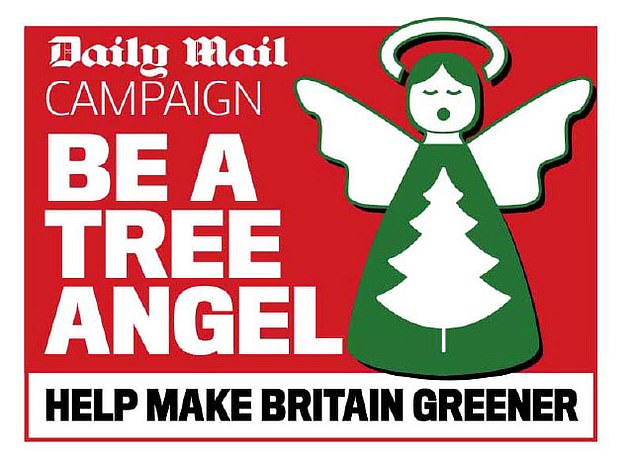 The Mail has given away more than 10,000 saplings, including oak, birch, conifers, willow, hazel and holly as part of our ‘Be A Tree Angel’ campaign

‘Trees connect us with nature, encouraging birds to bring their beautiful song into our urban lives – robins, blackbirds, thrushes, goldfinches and blue tits will all sing from street, park and garden trees.’

Woodland covers just 13 per cent of the UK and Miss Speight said the RSPB would lobby the next government for this percentage to grow.

‘For too long we have been trying to force nature into smaller and smaller places to fit in with our plans,’ she added.

‘We are part of nature, and just as our wildlife will benefit from more trees across the UK, so will we. From trees to peatlands to wetlands, nature holds many of the answers we need right now.

‘So the RSPB is backing the Daily Mail’s campaign to Be A Tree Angel and Make Britain Greener as something everyone can get involved with.’