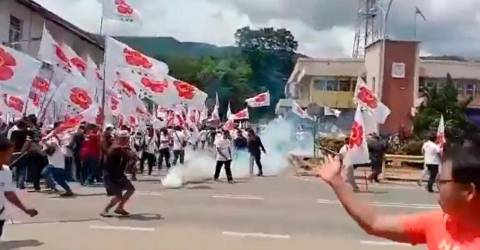 No one had been arrested so far in connection with the incident which happened at 11.30 am at the Dewan DSP Antanom here, he said. Police restored order at 2.38 pm.

“Due to dissatisfaction, some 300 of his (Peter) supporters tried to storm the hall … security personnel took action to disperse the supporters and prevent them from entering the hall.

“A meeting was held between lawyers representing Peter, EC officials and police to ask the supporters not to be unruly. At 12.32 pm, Peter emerged from the hall and asked his supporters to accept the EC’s decision,” he told a news conference here.

Idris said Peter subsequently lodged a report at the Tenom police station over the rejection of his nomination and Peter would be taking follow-up action on the matter.

Police have advised the public to remain calm and not to get emotional over the incident.

A video of the incident has gone viral on social media, showing security forces using tear gas in an attempt to control the unruly crowd outside the nomination centre.

Peter later said he would file for a judicial review at the High Court on Monday regarding the rejection of his nomination papers for the Tenom parliamentary seat in the 15th general election. – Bernama