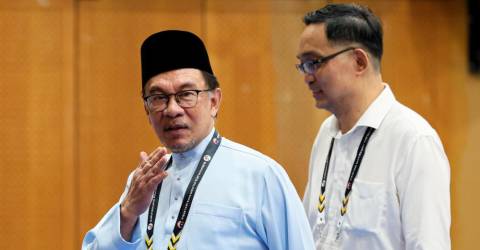 IPOH: Former Batu Member of Parliament (MP) Chua Tian Chang, better known as Tian Chua, is facing the sack after his decision to contest the Batu parliamentary seat as an independent candidate in the 15th general election (GE15).

PKR president Datuk Seri Anwar Ibrahim said as a PKR veteran, Chua should not have gone with that decision.

“As per PKR’s policy, those who contest as an independent candidate or choose to leave the party for whatever reasons will automatically be sacked,“ he said when met after the announcement by the Election Commission (EC) at Institut Latihan Perindustrian (ILP) Meru here today.

Earlier, local news portals reported that Chua is prepared to face any form of action taken against him by the party for contesting as an independent at the Batu parliamentary seat in GE15 hence facing Pakatan Harapan (PH) coalition’s candidate P. Prabakaran.

The former PKR vice-president had filed to contest in Batu as an independent candidate earlier this morning, seeking a return to the urban seat he had represented for two terms from 2008.

Prabakaran who ran and won as an independent candidate in 2018 subsequently joined PKR and is now defending his seat against nine others in GE15. – Bernama