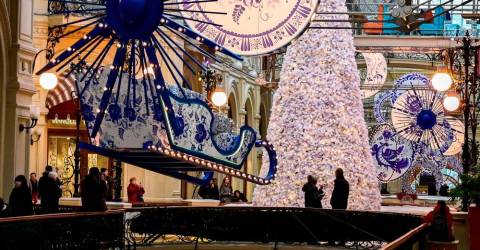 MOSCOW: Russia has entered a recession, nine months after launching its offensive in Ukraine as Western sanctions weigh on the economy, according to official data published on Wednesday (Nov 16).

Gross domestic product (GDP) shrank 4% in the third quarter, according to a preliminary estimate by the national statistics agency Rosstat.

As that follows one of the same size in the second quarter, Russia now meets the technical definition of a recession with two consecutive quarters of falling GDP.

The 4% drop in economic output between July and September was less than the 4.5% contraction many analysts had expected, however.

The contraction was driven by a 22.6% plunge in wholesale trade and a 9.1% drop in retail trade.

Meanwhile, construction grew by 6.7% and agriculture 6.2%.

Russia’s economy has been struggling under a myriad of problems.

Western sanctions have limited exports and imports, including of key manufacturing components and spare parts.

Companies have also been suffering from a lack of staff as a partial mobilisation has taken several hundred thousand men out of the workforce.

Despite a contracting economy, Russia’s unemployment rate stood at 3.9% in September, according to Rosstat.

As a result, the Russian economy has become even more dependent upon energy exports, which have accounted for about 40% of federal government revenue.

According to the office of Boris Titov, the presidential commissioner for entrepreneurs, about a third of the 5,800 Russian companies recently surveyed had suffered a drop in sales in the past months.

The September mobilisation of 300,000 military reservists has impacted a third of companies, according to that same survey, the daily Kommersant said.

“The situation has continued to deteriorate, it’s no surprise,” said Dmitry Polevoy, director of investments at Locko Invest in Moscow.

Yet the Russian economy has so far survived Western sanctions better than many economists expected.

On Nov 8, the central bank predicted GDP would contract by 3.5% this year.

The International Monetary Fund (IMF) and the World Bank are respectively estimating a fall in Russian GDP of 3.4% and 4.5%.

The resilience of the economy is due in large part to the surge in global energy prices following the offensive in Ukraine and a restrictive monetary policy.

After Russia was hit by Western sanctions, the central bank drastically raised the key rate from 9.5% to 20% in a bid to counter inflation and prop up the ruble.

The Bank of Russia quickly reduced it thereafter and last month left it at 7.5% in what governor Elvira Nabiullina called a sign of “adaptation” by the economy to a “new reality”.

But many analysts believe things are going to get worse for Russia’s economy before they improve.

“GDP could contract even more sharply, by up to 7%” in the fourth quarter, Polevoy told AFP.

Valery Mironov at the Higher School of Economics in Moscow said sanctions were having a delayed impact on the Russian economy.

“Problems are clearly already present, but in reality we’re seeing their effects being pushed back to 2023,” he said, as the government has taken steps to support companies.

Central bank governor Nabiullina said last week that the Western sanctions were powerful and warned “their impact on the Russian and global economy shouldn’t be underestimated”. – AFP