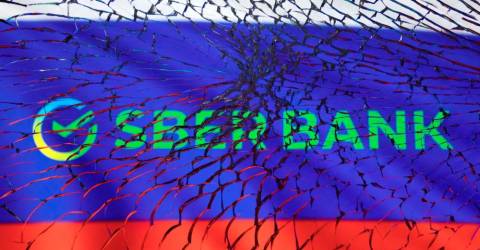 MOSCOW: Sberbank on Monday (Dec 26) accused Glencore of choosing not to foot a bill for oil supplied via the Russian lender, saying the global commodities trader could have found a way to pay up without violating Western sanctions.

Sberbank has taken legal action to recover debt and penalties from Glencore Energy UK Ltd over the two consignments, supplied by a subsidiary of Russia’s largest bank in March. They were worth roughly €58 million (RM272 million) each, according to Moscow court filings.

“There are different ways of working without violating sanctions … this issue could have been resolved, but unfortunately Glencore is refusing any communications with us.”

The trader this month asked the Moscow court to move the case to Singapore.

In March, as Western sanctions over Russia’s actions in Ukraine started coming into force, Glencore said it would not enter into new trading business in respect of Russian-origin commodities unless directed by the relevant government authorities.

It also said it would honour its legal obligations under pre-existing contracts, subject to complying with all applicable sanctions.

Vedyakhin also told reporters yesterday Sberbank will be forced to close its office in the United Arab Emirates (UAE) early next year.

“Unfortunately, in the context of (Western) sanctions restrictions, we are facing serious constraints on our SberInvest Middle East office in Abu Dhabi and we, unfortunately, are forced to close it in the first quarter of 2023.”

He said Sberbank would continue serving clients in the UAE market and that active communications were under way with Chinese regulators about opening an office there.

Sberbank’s European arm, based in Vienna, was closed by order of the European Central Bank in March, after the ECB warned that the bank faced failure due to a run on deposits.

The Bank of Russia ordered financial institutions to limit their disclosures earlier this year. Sberbank resumed some reporting this quarter, posting a 84.8% year-on-year slump in net profit from January-November, outperforming the wider sector that was still loss-making as of Nov 1.

Vedyakhin declined to give full-year forecasts but said Sberbank was confident of being profitable in December. – Reuters