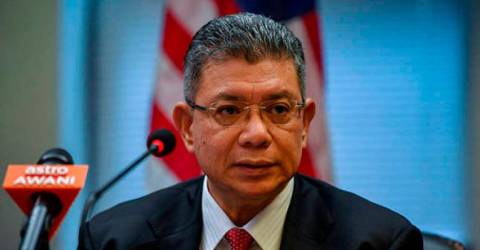 NEW DELHI: Malaysia’s Foreign Minister Datuk Seri Saifuddin Abdullah(pix) joined his counterparts from India and Southeast Asia in New Delhi on Thursday for a meeting which provides an opportunity for ASEAN and India to review the progress of their cooperation and discuss the future direction of its relations.

Malaysia’s Foreign Ministry in a statement yesterday said that Saifuddin, together with other ASEAN Foreign Ministers, will also be attending the Delhi Dialogue XII.

Under the theme “Breaking Barriers, Building Bridges in Indo-Pacific”, Saifuddin will be delivering his remarks at the Ministerial Panel on Thirty Years of ASEAN-India Relations of the Delhi Dialogue XII.

“Under the current global uncertainties, as we review our journey of the last 30 years and chart our path for the coming decades, it is important that we identify a new set of priorities while ensuring the early realisation of our ongoing initiatives,“ Jaishankar said in his opening remarks.

“ASEAN’s role today is perhaps more important than ever before given the geopolitical challenges and uncertainties that the world faces,“ he said.

The meeting is co-chaired by Jaishankar and Singapore’s Foreign Minister Dr Vivian Balakrishnan.-Bernama