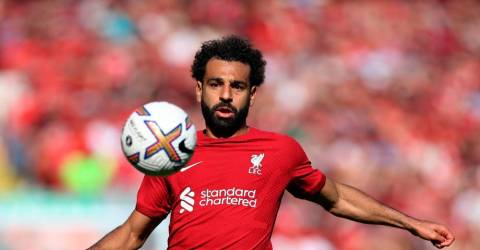 PARIS: Liverpool equalled the record for the biggest Premier League win by thrashing Bournemouth 9-0 at the weekend, but prolific Egyptian Mohamed Salah was not among the scorers.

Salah has netted twice in four league matches since the season kicked off — equalising at Fulham and snatching a late consolation goal at Manchester United.

A strained relationship between Wolves and Willy Boly intensified when the Ivory Coast defender failed to turn up for a 1-1 draw with Newcastle after being included in the squad.

The two-time African Footballer of the Year played an inadvertent role in the build-up to the fourth goal when his attempted pass ricocheted off Bournemouth’s Marcus Tavernier and flew toward the six-yard box, where Roberto Firmino directed the ball into the net.

Nottingham Forest had a £1 million ($1.2 mn/1.2 mn euros) bid for the centre-half turned down but it looks as if Boly will leave Molineux before the transfer window shuts on Thursday. “He has been a great professional but in the end he wants to force something,“ said Wolves manager Bruno Lage.

The energy and persistance of the tall Nigerian was rewarded after 55 minutes when he tapped in the winner for Almeria in a 2-1 La Liga victory over Sevilla. Sadiq netted off a low cross and came close to scoring just before and after his goal.

Senegal international Dia couldn’t have hoped for a better first start for Salernitana after joining on loan from Villarreal, opening the scoring and setting up two more in a 4-0 Serie A hammering of Sampdoria. The 25-year-old tapped home the opener in the seventh minute before laying on Federico Bonazzoli’s superb second and Erik Botheim’s smart finish, which rounded off the scoring.

Mane had two goals ruled out for offside in Bayern’s 1-1 draw with Borussia Moenchengladbach, meaning the Senegalese has now had goals chalked off in each of his four Bundesliga games this season for either offside or handball. Mane was a constant danger, frequently sewing seeds of doubt in Gladbach’s backline.

The 24-year-old Egypt striker — who played in the Pharaohs’ side beaten by Senegal on penalties in this year’s Africa Cup of Nations final — scored his first goal in French football as Nantes beat Toulouse 3-1. Signed on loan from Turkish giants Galatasaray, Mohamed also set up a goal for Nigerian teammate Moses Simon as Nantes claimed their first win of the Ligue 1 season.

The combative 22-year-old Mali midfielder started for Monaco for the first time and impressed in his new side’s 1-1 draw at Paris Saint-Germain. Camara did his best to make life difficult for the PSG superstars, although he also picked up a second-half booking before being substituted. Signed from Red Bull Salzburg for a reported 15 million euros ($14.9 mn), Camara was brought in to replace Real Madrid-bound Aurelien Tchouameni. – AFP