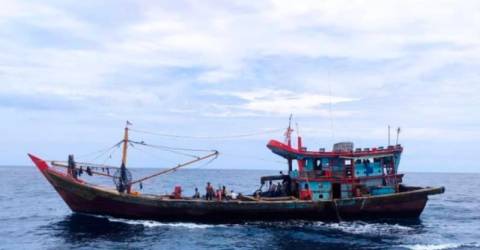 BATU PAHAT: The search and rescue operation (SAR) for the two fishermen who were reported missing after their boat capsized in the waters of Parit Hailam near here yesterday has been extended to 230.88 square nautical miles from the location.

Batu Pahat district police chief ACP Ismail Dollah said the sonar system was also used to determine the depth of water and position of the boat before the diving team went down to search for the victims who may be trapped.

The boat, with four local fishermen, was believed to have been hit by huge waves, causing it to capsize at about 9.6 nautical miles southwest of Parit Hailam.

Te Chia Rong, 38, and Chia Hock Heng, 60, were said to be sleeping and unable to leave the boat on time, while Te Chia Haur, 40, and Tee Kian Muar, 33, were rescued by passing fishing boats.-Bernama