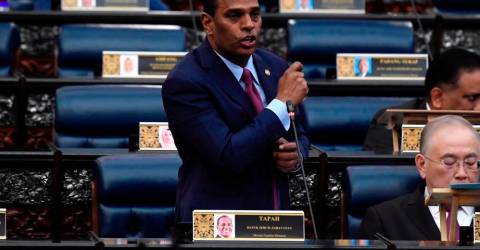 KUALA LUMPUR: The Ministry of Human Resources is taking steps to tighten the process of channelling funds for the ‘PenjanaKerjaya’ hiring incentive programme to prevent issues of false claims and misappropriation of funds from recurring, says its minister Datuk Seri M. Saravanan.

He said his ministry had identified the weaknesses and would improve the regulation.

“I assure you that we will tighten the existing rules so that this does not happen again,“ he said when winding up the debate on the Employment Insurance System (Amendment) Bill 2022 at the committee level in the Dewan Rakyat today.

He was responding to a question from M. Kulasegaran (PH-Ipoh Barat) regarding the ministry’s steps to ensure that the benefits received through the amendment to the Employment Insurance System Act 2017 (Act 800) were not misappropriated like the PenjanaKerjaya funds.

Meanwhile, Saravanan said it was too early to know the actual number of false claims and the amount of funds misappropriated under PenjanaKerjaya, as the matter was still under investigation.

It was previously reported that false claims and misappropriation of the funds involved about RM100 million in total.

Earlier, Saravanan when tabling the Employment Insurance System (Amendment) Bill 2022 for the second reading said this was to increase the maximum monthly salary ceiling limit for contributions from RM4,000 to RM5,000.

He said this would improve the Social Security Organisation’s (Socso) social security protection by increasing benefits such as Jobseeker’s Allowance and Early Re-employment Allowance.