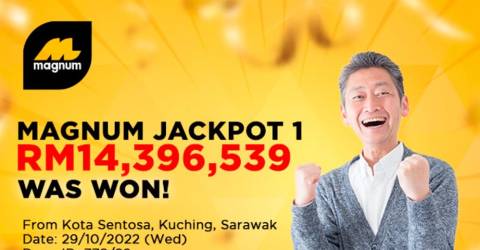 A lucky Sarawakian struck the Magnum 4D Jackpot Grand Prize of RM14.3 million on 29 Oct 2022. He said winning the fortune was unexpected and let out a cry of joy and happiness the moment he found out he had won.

The 66-year-old lucky man who bought the ticket in a betting station in Kota Sentosa, Kuching, Sarawak, usually played 4D Jackpot by purchasing system5 bet lines for RM20, but the winning numbers 8239 and 3336 numbers have a story to tell.

“I used to work as a technician for many years, renting a kampong house from an old couple, who owns both houses next to each other. Due to the couple’s old age and illnesses, they sometimes require assistance. Noticing they were all alone, being kind and compassionate, I decided to take care of them like they were my own parents. They have an old car with the number 8239, and I feel lucky to have bought the number.

As for 3336, I went to a Chinese temple in Kuala Lumpur a few years ago, and I was blessed by a holy entity where that gave me this lucky number based on my Chinese astrology. With my story, I think we now believe that being brought good fortunes by holy deities is possible.”

“I am an ardent supporter of Magnum 4D for the past 40 years, started buying the classic 4D numbers when they were using the handwritten system. When Magnum launched Jackpot games, it was easy to place my bet as I will just pair up my usual classic 4D numbers. I love Magnum Jackpot and normally I will play 10-15 numbers each time,” the big winner shared.

After winning one of the biggest jackpots in history, the winner was extremely happy as he had never won such a big lottery amount before. “During the result day, I was watching the live results through the Magnum 4D app. The moment I saw both numbers were at the top 3 prizes, I was in disbelief and kept checking the result a few times. My heart leapt up for joy after realising that my dream had indeed come true. It’s been a tough year. This is life-changing,“ he said.

When asked how he will be spending his prize money, the winner said that he will share the windfall with his family members, allocate some donations to charity organisations, and enjoy his life by arranging his finances accordingly.

This is the 127th Magnum Jackpot winner since launched. Magnum would like to congratulate all winners and hope that the prize money will bring about positive changes to their lives. It is easy to play with Magnum 4D.