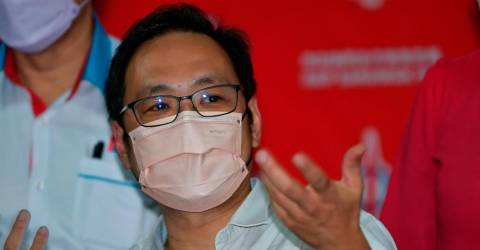 KUCHING: Sarawak Pakatan Harapan (PH) has not ruled out the possibility of working together with Parti Sarawak Bersatu (PSB) after the 12th state election, its chairman Chong Chieng Jen (pix) said.

Chong, who is Sarawak DAP chairman, said the focus now is to win as many seats as possible in the state polls, and any decision on alliances will have to wait until the election is over.

“For now, our efforts are to win as many seats as possible in this election. What is in store beyond that and our future direction will be discussed between DAP, PKR and Amanah after that.

“We all want (to work with) parties who believe in good governance, and this has to be agreed upon by those who want to work with us,” Chong, who is involved in a four-cornered contest in Padungan, told a media conference here today.

In this election, PKR is fielding candidates in 28 seats while DAP will contest in 26 seats and Amanah (8).

Sarawak will go to the polls on Dec 18. — Bernama