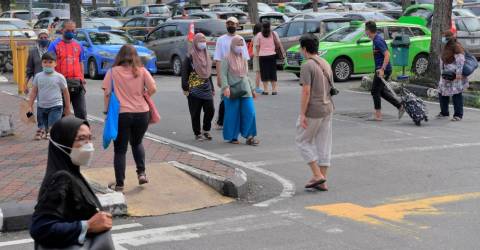 KUCHING: Though it is no longer compulsory to wear a facemask outdoors and in open spaces, a majority of the people seems to be more comfortable wearing them.

A Bernama check found that people here were still taking precautionary measures and have chosen to continue wearing face masks even when outside buildings.

Fong Yi Ting, 32, said she still chose to wear a face mask although it was no longer mandatory outdoors except when she was carrying out activities such as exercising.

“I’ve gotten used to wearing it after doing so for the past two years. Furthermore, there are still cases, so this is for my own safety,” she said.

In addition to the wearing of face masks in outdoor settings, the new relaxed standard operating procedures that took effect from today also state that it is no longer compulsory for MySejahtera check-in when entering public places or premises as well as physical distancing.

The announcement by Health Minister Khairy Jamaluddin was also agreed to by the Sarawak Disaster Management Committee (JPBN).

Lilian Chia, 49, when met at a food outlet here, said she was relieved that the MySejahtera check-ins were no longer needed because to her it was bothersome and had delayed entry into business premises.