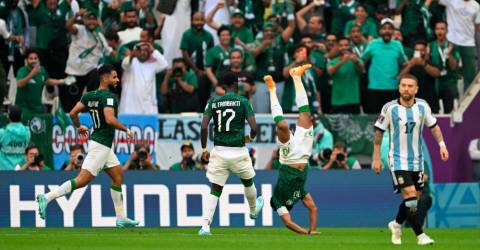 RIYADH: Disbelieving Saudis formed impromptu dance circles and waved the sword-emblazoned national flag from the windows of speeding cars in Riyadh on Tuesday after their team’s sensational win over Lionel Messi’s Argentina.

As the final whistle blew in the group-stage shocker with a 2-1 scorecard that ended Argentina’s 36-match unbeaten streak, fans watching on a big screen at a stadium in the capital sent shisha pipes flying as they rushed to celebrate.

“Nothing is impossible for Saudi Arabia… The future is here and we are the future,“ 35-year-old Tareq al-Shammari said at the Mrsool Park stadium, as fans stormed the pitch and belted out chants and songs around him.

“We have people who love football and we adore it,“ said Sultan, wearing a white thobe (gown) and a green-and-white scarf.

“We are investing in infrastructure and we have all the capabilities to compete with European countries.”

Few could have predicted that Herve Renard’s Green Falcons, ranked 51st in the world, would topple the twice-world champions led by the feted Messi, who has seven Ballons d’Or to his name.

The scenes of jubilation, with some fans wiping away tears with their bright green Saudi banners, were a sharp contrast to the subdued atmosphere during the first half, when Messi scored a penalty and Argentina had three goals ruled out for offside.

But the crowd was jolted into life just three minutes into the second half, when the Saudis equalised.

Celebrations exploded after Salem Al-Dawsari gave the Green Falcons a shock lead five minutes later, and tense fans loudly cheered every save by goalkeeper Mohammed Alowais — who didn’t let another ball past, despite extended stoppage time.

“No one from Saudi expected that, but they did it.”

Riyadh prepared for an all-night party as congratulations poured in from high-ranking Saudi officials.

The move comes in the middle of final exams in the Gulf nation, indicating that they will have to be rescheduled.

Turki al-Sheikh, an adviser at the Royal Court and head of Saudi Arabia’s General Entertainment Authority, announced on Twitter that admission fees would be waived at major theme parks and entertainment centres in the city on Tuesday.

Messi is no stranger to Saudi Arabia, having been named a tourism adviser to the kingdom as it tries to tempt visitors from abroad.

Yet Saudis on Twitter were quick to gloat over his loss, with one meme showing a man in a white robe roasting a goat — representing Messi, sometimes referred to as the Greatest Of All Time or GOAT — over an open fire.

Officials touted the win as a victory for Crown Prince Mohammed bin Salman’s reform agenda, which has leaned heavily on sports to try to improve the kingdom’s image abroad.

The push, which has included a controversial new golf league, heavyweight boxing and Formula One, has drawn accusations of “sportswashing”, or using such events to distract from human rights abuses.

The kingdom is even in talks with Egypt and Greece on a joint proposal to host the World Cup in 2030, an Egyptian official said earlier this year.

Tuesday’s win “is a tangible result of the huge efforts put in place in last 5 years to develop #Saudi sports and youth. What a fantastic affirmation of this massive effort,“ Ali Shihabi, a Saudi analyst close to the government, said on Twitter.

“For all those that screamed Saudi ‘sports washing’, enjoy the result!!”-AFP