By Hector Nunns For The Daily Mail

Snooker is the latest sport to announce a multi-million pound event in Saudi Arabia.

The Saudi Arabia Masters ranking event will take place next October with a record prize fund of £2.5million for the 128 tour players and local wildcards taking part.

The winner will receive £500,000 — the same as to the world champion at the Crucible. This follows boxer Anthony Joshua‘s heavyweight world-title fight in the desert on Saturday, as well as golf and tennis events staged in Saudi.

Amnesty International pointed to 148 executions in Saudi Arabia last year, a spokesperson saying, ‘Beneath the surface of the sporting glitz, things are darker, staying the same or getting worse. Once the camera crews roll out of town, the situation remains very bad.

‘We do not urge a boycott, we know a sports career can be short. We do urge anyone going to educate themselves about Saudi Arabia, don’t be naive, and speak out about human rights.’

But Barry Hearn called the move ‘a giant leap forward for our sport’. He added: ‘We are thrilled to stage a new and momentous tournament in the Middle East. Snooker has grown to such an extent that we are now creating exceptional tournaments at this level.’ 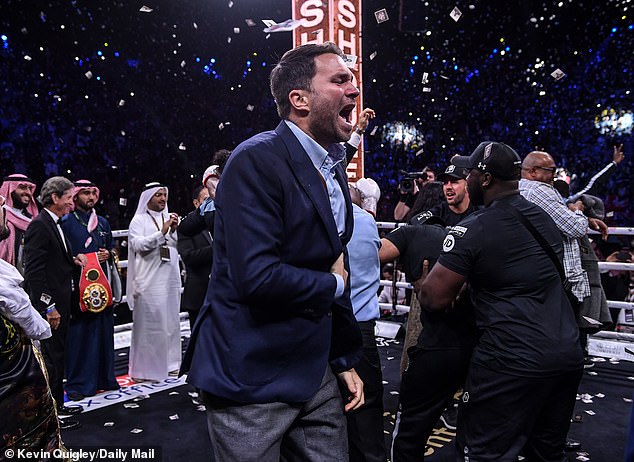 Jason Ferguson, the chairman of the WPBSA, defended the body’s record and approach. ‘We are a completely non-political organisation, we don’t differentiate between religion or ethnicity anywhere in the world,’ he said.

‘I would stress our organisation’s promotion of mixed gender sport, disability work, community work, a schools programme. That is us. Everyone is equal on the green baize of a snooker table.’

The draw for next month’s Masters took place on Sunday, missing the name of seven-time winner Ronnie O’Sullivan.

O’Sullivan has decided to skip the tournament, where his place has been taken by 17th-ranked Ali Carter, who must play three-time winner Mark Selby.