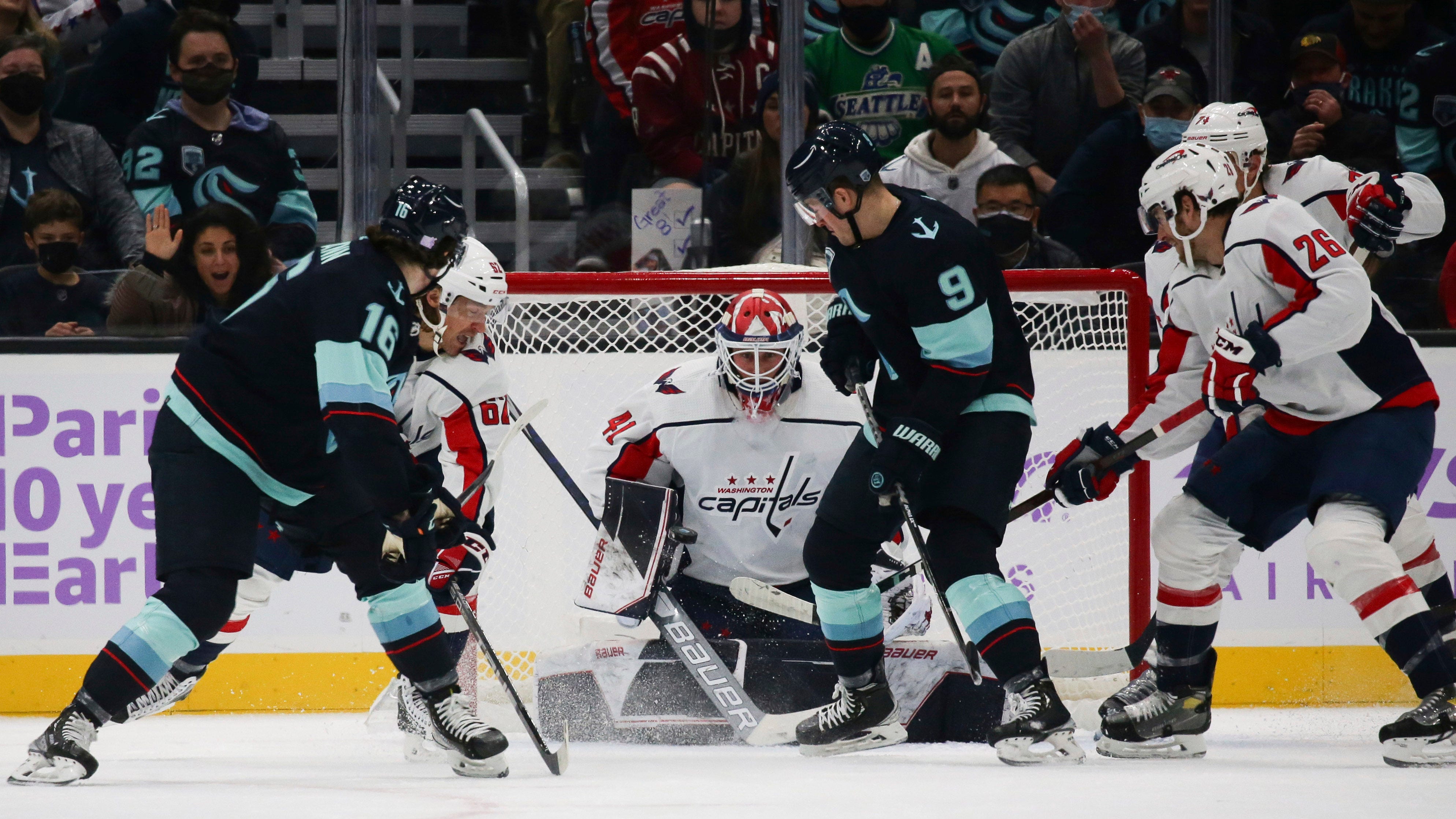 Jaden Schwartz had a goal and three assists and the Seattle Kraken beat the Washington Capitals 5-2 on Sunday night to snap a six-game losing streak.

Calle Jarnkrok and Yanni Gorde each added a goal and an assist, and Schwartz reached 401 career points in Seattle’s first win since Nov. 4.

“Maybe because we’re sick and tired of losing games,” Jarnkrok said when asked what the difference was Sunday.

“We got together as a group and talked about how we need to play,” he added. “We went out there today and we did it. But it’s got to be like this every game.”

Jared McCann and Adam Larsson also scored for Seattle, which got 37 saves from Philipp Grubauer.

Washington entered the game on a 6-0-1 streak and took a 1-0 lead just 3 1/2 minutes in on Tom Wilson’s slapshot. But the Caps were playing for the second night in a row, and looked tired as the Kraken pushed them around during the heart of a three-goal second period.

“The game got away from us in about 4 minutes,” Capitals center Nic Dowd said. “And then I thought we actually played really well the rest of the game, controlled the game. I think we had like 20 shots in the third period, something like that. And we had chances to win that game if we hadn’t let it get away from us early.”

Alex Ovechkin scored his 15th goal of the season for Washington, which hasn’t lost since Nov. 6. Wilson assisted on the goal.

The Kraken tied it late in the first period with Evgeny Kuznetsov serving 2 minutes for holding. Schwartz, a constant threat in the first 40 minutes with five shots and high energy, bounced a close shot off Vitek Vanecek’s stick and McCann backhanded it past the goalie from 10 feet in front of the net to tie the game at 15:58. Morgan Geekie also had an assist.

Seattle has scored at least one power-play goal in four straight games.

Schwartz put the Kraken ahead 2-1 with a cleanup of Carson Soucy’s redirection at 6:17 in the second period. It was the Kraken’s first lead in more than 266 minutes.

Larsson made it 3-1 just 43 seconds later when he buried a breakaway slapshot on a pass ahead from Gorde and Jarnkrok.

Schwartz was again a factor later in the period when he poked the puck away from the Capitals at the defensive blue line ahead to Jarnkrok, who beat his defender and sent a shot past Vanecek from the left faceoff circle with about six minutes left. Schwartz’s last assist came as Gorde finished things off with an empty-net goal.

“Schwartzie is really good down below the circles in the offensive zone and you saw him, he was in his office tonight,” Kraken coach Dave Hakstol said. “And he produced. He produced and had a really good night offensively.”

Vanecek stopped 26 of 30 shots in his third loss of the season.

NOTES: Capitals F Conor Sheary (upper body injury) and F T.J. Oshie (lower body injury) sat out and are listed as day to day after both played Saturday in San Jose. Sheary scored two goals against the Sharks, but was scratched after warmups. Oshie, who was born in nearby Everett, had been out of the lineup since Oct. 27 before Saturday’s game. … Washington recalled forward Brett Leason from Hershey of the AHL and reassigned forward Garrett Pilon. Leason made his debut on Oct. 29 and has scored three points in 10 games for the Caps this season. … McCann has 11 points (seven goals, four assists) in 13 games.