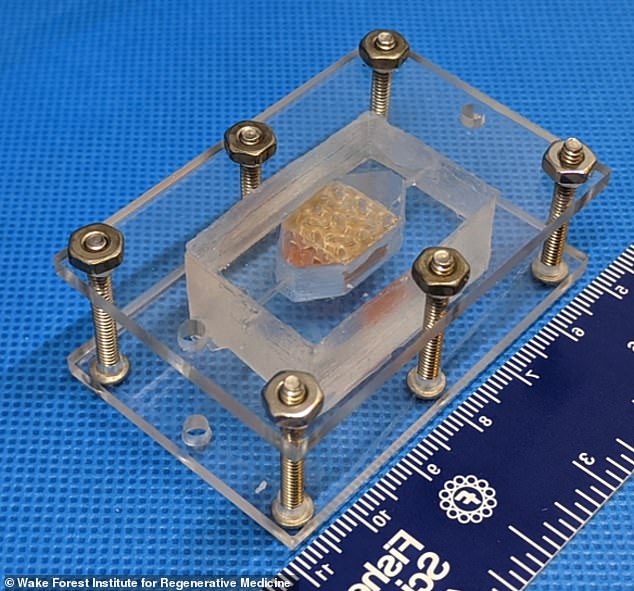 By Stacy Liberatore For Dailymail.com

Space fairing heroes living on the moon and Mars could one day receive transplants with 3D-printed human tissue.

Scientist from Wake Forest Institute for Regenerative Medicine (WFIRM) in Winston-Salem, North Carolina constructed a cube-shaped tissue capable of functioning for 30 days in the lab.

The breakthrough was part of NASA’s Vascular Tissue Challenge, a competition to create thick, vascularized human organ tissue in an in-vitro environment, and the group won first and second place.

The team created gel-like molds with ‘chambers’ to help cells form into tissue by allowing them to obtain enough oxygen and nutrients to survive an entire month.

Not only can 3D-printed tissue treat astronauts, but it may also be used in patients on Earth who are waiting for an organ transplant.

Scientist from Wake Forest Institute for Regenerative Medicine (WFIRM) in Winston-Salem, North Carolina constructed a cube-shaped tissue capable of functioning for 30 days in the lab

Wake Forest Institute consisted of of two teams, but Team Winston completed its trial first and will receive $300,000. The winners will also be giving the opportunity to advance their research aboard the International Space Station.

The scientists have been working on ways to turn living cells into living human body parts for at least a decade – in 2011 the team grew ears, muscles and jawbones.

The group has come a long way and accepted NASA’s challenge in 2016 to develop human tissue using 3D-printing techniques.